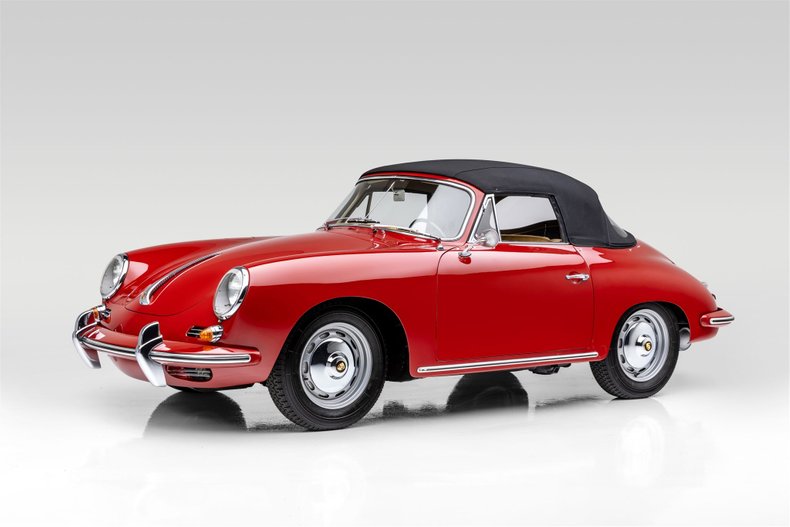 Incredibly dry and rust-free example with excellent gaps finished in Signal Red with Beige leatherette interior. Optional equipment from the factory included Ventilated chrome wheels and Dunlop Tires (B7). The paintwork is very presentable with an insignificant amount of road rash. Exterior trim, brightwork, rubber seals, and soft top are all in exceptional shape. A completely new German interior has recently been installed including front seats with leather faces, rear seats, dash, and door panels were all reupholstered in Cashmere leatherette. German square weave charcoal carpets were installed with a new soft top as well, the soft top has had a new pad was installed along with a tan headliner, a black German canvas top, and a boot cover. The undercarriage is completely detailed and in remarkable shape. Mechanically powered by the matching 1600cc flat-four engine with a 4-speed manual 741 transmission and recently rebuilt hydraulic drum braking system. An excellent opportunity to acquire an open 356 at a reasonable entry-level price.

History
The 356 B T6 body was the last 356 body change until the end of production. It was introduced in September 1961 for the 1962 to 1963 model year. It featured four-wheel ribbed drum brakes all around with better cooling, as well as three options of the 1600cc pushrod engine. The rear deck now had twin grills for better cooling of the engine, the front hood was squared off in the front and the fuel tank was changed to include an outside fuel fill with a fuel door. The best of all the 356 transmissions was the 741, which was like sifting through butter with full synchromesh manual 4-speed and of course, the ZF steering box made the 356s a joy in the corners!