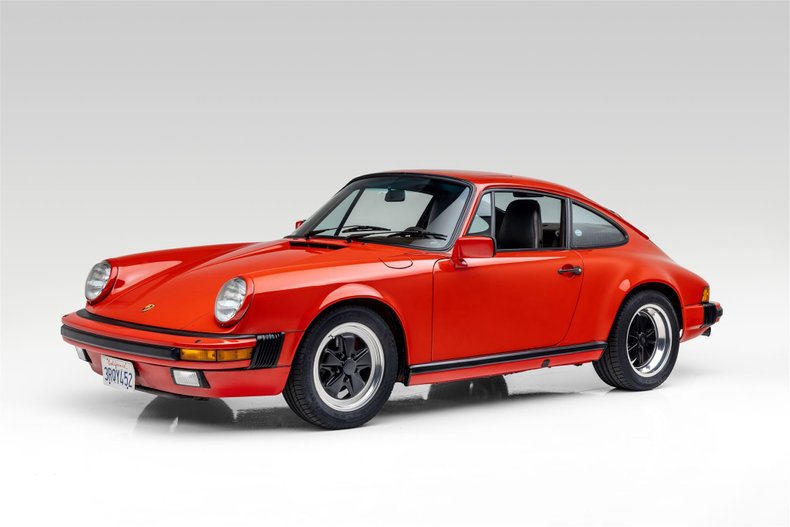 Four (4) documented owners, California car, original paintwork with an equally impressive original interior. Originally sold by Bill Yates Inc. in San Juan Capistrano, California on November 13, 1985, finished in its factory color combination of Guards Red (L027) with a Fawn interior (LU). The paintwork is all original and in very good condition with excellent gaps and panel fit. The exterior is trimmed with its original components and retains its factory Sekurit glass and forged alloy Fuchs wheels. The upholstery is all original with an electric sunroof and air conditioning that is ice cold.

In accordance with the service records, the history begins in 1986 with Mr. Galasso (first owner) who enjoyed the Carrera for over seven years and accrued the first 29,000 miles. In 1993, Mr. Loretto (second owner) purchased the 911, Carrera, serviced the car regularly in the L.A. area, and put 15,500 miles on the car over 3 years until it was then sold to Mr. Glass (third owner), in 1996. On July 26, 2012, the Carrera was sold to the fourth owner by Truspeed Motorcars in Costa Mesa, California with 110,897 miles. The fourth owner drove the 911 very sparingly and serviced the vehicle as needed. At 116,517 miles, on November 17th, 2016, Precision Motion in Colton, California performed a full transmission rebuild, installed a new engine sound pad, and replace the front windshield seal, which totaled $5,269.42.

History
When all was said and done, the model 911 3.2 Carrera did not disappoint. It not only lived up to the standards set by the model 911SC that it replaced, but it also exceeded all expectations. Now a much sought-after classic car for Porsche enthusiasts, the model 911 3.2 Carrera was the last version of the original 911 series. The model 911's produced after 1989 all came with completely new exterior styling as well as new brake, suspension, and electronic technology. You could say the 3.2 Carrera was a grand finale of sorts, but it was certainly not the end of the road for the 911.