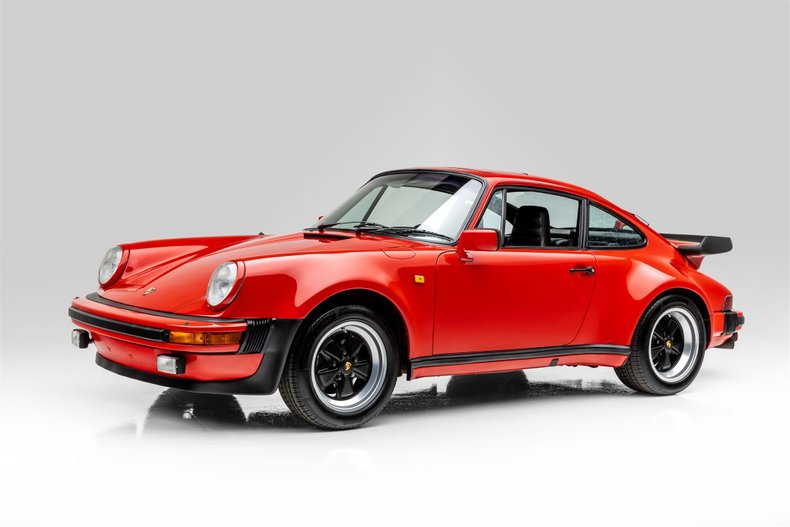 One (1) owner purchased new from Porsche and imported it to Las Vegas, Nevada in 1982. C-Program RoW (Rest of the World) Number 511 out of 938 Porsche 930's produced from August 1981 to July 1982. Well maintained and cared for with receipts and a recent service was just done. A complete repaint was done in 1999 in Guards Red (color code 027). The paintwork is stunning and it is in exceptional condition. The black interior is original and in very nice condition including carpets, headliner, leather front seats, dash, door pockets with all new rubbers. The Fuch alloy rims are in great condition with new Pirelli P Zero radial tires (205/55 ZR 16 front 245/45 ZR 16 rear). The undercarriage is solid and rust-free. This is a very honest 930 that performs exceptionally.

Over the years the engine and transmission have been serviced and extremely well maintained. All electrical and mechanics are in excellent working order and are ready to enjoy! Factory options include electric sunroof, AM/FM Pioneer stereo with CD, factory left & right sport seats, alarm system, and factory air conditioning. Complete with books, records, and clean Carfax.

The 930's claim to fame was the astoundingly powerful 3.3-liter flat-six Turbo engine which sends all its power to the rear wheels through the four-speed manual transmission. The braking system has four-wheel disc brakes with Big Red calibers that are able to stop the car on a dime. The 930 was truly one of the best designs Porsche ever built for the street! A piece of Porsche history that will certainly continue to captivate not only Porsche enthusiasts, but all onlookers with its rarity and true beauty. Do not miss this rare opportunity!

The turbo boost comes on like a shotgun blast, which is why these cars have such a split personality. Master it, however, and you'll be at the helm of one of the most potent road cars ever unleashed to the general public. Even today its performance will humble just about everything on the road that doesn't cost $300,000. This remarkable 930 delivers every bit of the driving experience you'd expect. Towering power & awesome braking makes it one of the most entertaining road cars ever devised.

Note: Not smog legal for the state of California

Porsche made its first and most significant changes to the 930 for 1978, enlarging the engine to 3.3 liters and adding an air-to-air intercooler. By cooling the pressurized air charge, the intercooler helped increase power to 300 hp (DIN); the rear 'whale tail' spoiler was re-profiled and raised slightly to make room for the intercooler. Porsche also upgraded the brakes to units similar to those used on the 917 race cars. While the increase in displacement and addition of an intercooler increased the power output and torque, these changes also added to the weight of the vehicle, especially to the engine, which contributed to a substantial change in the handling and character of the car when compared to the earlier 3.0 liter models.

The 930 remained available in Europe, and for 1983 a 330 PS (243 kW; 325 hp) performance option became available on a build-to-order basis from Porsche. With the add-on came a four-pipe exhaust system and an additional oil-cooler requiring a remodeled front spoiler and units bearing the add-on often featured additional ventilation holes in the rear fenders and modified rockers.