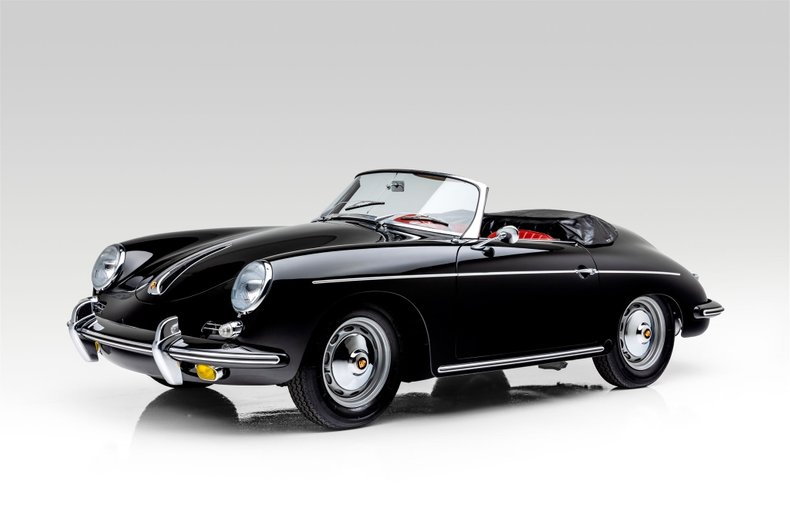 Completed September 20, 1960, by Drauz Custom Coachwork, one of 1,528 T5 356B Roadsters produced in 1960. Beautifully restored from 2017 to 2019 with records. Finished in the original factory color combination Black (Schwarz) with a Red (Rot) interior, Red German square weave carpets, black German soft-top, and boot cover supplied by Autos International in San Diego, California. This 356 Roadster is solid and rust-free with a fully detailed undercarriage. Excellent gaps, and panel fit with a very straight body.

Mechanically, it is a blast to drive with a powerful period-correct 1600cc Super-90 engine (producing 90 horsepower). The Kardex confirms it was originally delivered with a Super-90 engine number 801321, the current engine in the 356 is 801139 (type 616/7). The manual 4-speed 716 transmission shifts perfectly and the four-wheel drum braking system has been recently rebuilt.

According to the Porsche Kardex, this 356B T5 Roadster was delivered by Brumos Porsche in Jacksonville, Florida, and the original color combination was Black with a Red interior. The factory options: cigar lighter, ashtray, exterior mirror, armrest, and chrome wheels with Dunlop 165 x 15” tires. Several options have been added including Hella 128 amber fog lights, European headlamps, and painted rims with Vredestein 165 HR 15 86H tires. Complete with a tool kit, jack, owner's manual, and spare tire. Extremely well maintained with a recent service and ready to enjoy!

Roadsters have become highly collectible, and quality examples such as this 356 come to market infrequently. This 356 Roadster is perfect for 356 club shows, Cars & Coffee or simply to enjoy with the top-down for weekend touring.

History
Porsche's popular 356 Roadster was introduced for the 1960 model year as a replacement of the one-year-only Convertible D, the Speedster's more civilized successor. The new T-5 Roadster brought several marked changes in appearance: The front fenders and headlamps were raised, as were both the front and rear bumpers, to better deal with urban parking. New vertical bumper guards also helped in that respect. New brake-cooling intakes were added to the nose below the front bumper.