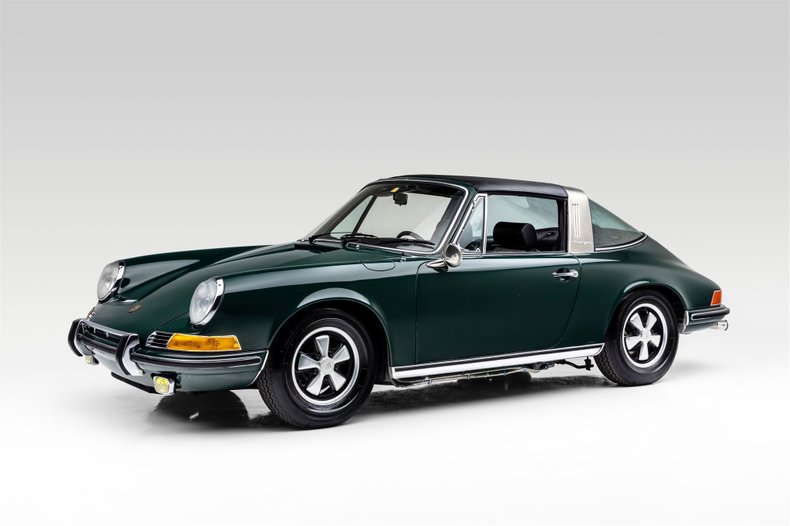 Finished in the original color combination of Irish Green (1510) with Black leatherette interior. The paintwork is in very nice condition with excellent gaps and panel fit and “S” trim. Very nice interior including carpets, steering wheel, front seats with houndstooth inserts, and VDO instrumentation. Additional equipment was added on for personal use such as the period-correct Blaupunkt radio and original air conditioning, both functioning..

The earliest known provenance of this vehicle begins with the second owner who kept the vehicle in Reno, Nevada from the early 1990s to 2005. The second owner kept a detailed logbook of all the oil changes, tune-ups, valve adjustments, and the mileage when those items occurred. By 1991, the mileage recorded had reached 51,271 miles. In late 2005, the vehicle was purchased by the third owner Mr. Walshaw, who was a longtime friend of the second owner. Directly after purchasing, Mr. Walshaw installed a factory air conditioning to aid with the intense Nevada heat. The second and third owners completed a majority of the services at Sport Haus in Reno, Nevada from 2001- 2011. In late 2011, Mr. Walshaw believed it was time to part ways with his 911 and offered it for sale via Pelican Parts classifieds with 74,000 miles. After two months of being listed, the 911 was purchased by the fourth owner who lived in Santa Cruz, California where the vehicle remained until 2021.

History
1969 brought the first substantive changes to the Porsche 911 lineup, which now consisted of three models: the 911T, 911E and 911S. All of these were available in a Coupe and a Targa body styles. The T was carbureted until 1972, while the E and S were mechanically fuel injected. For 1969, Porsche stretched the wheelbase and flared the wheel arches, allowing wider tires to be fitted. Unlike most performance cars of the era, horsepower kept climbing through the use of fuel injection and a series of 200 cc displacement increases culminating in the 1972 2.4-liter cars.

The T was the base model with the lowest horsepower. It was tractable and quite adequate for street use. The E had a bit more horsepower and more luxury features, while the 200 hp S was the car for weekend racers. Rust continued to be an issue, although by this time Porsche was at least paying more attention to the car's vulnerable floor pans. A mid-year change to Bosch K-Jetronic (CIS) injection for the 1973 ½ 911T produced what many believed to be the sweetest running 911 yet.