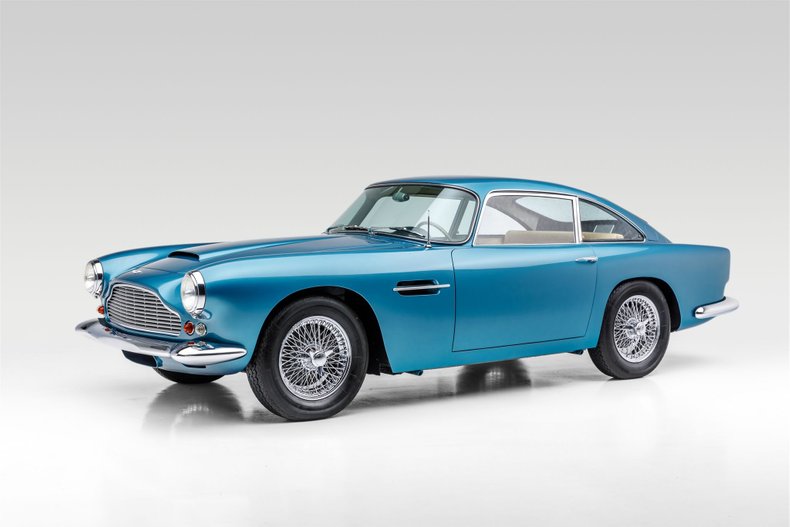 The Aston Martin DB4 was five years in development and shared little with the Mark III that preceded it. Its profile is instantly recognizable; to many connoisseurs, it is a perfectly proportioned automobile, and it set the style template for the famous DB5 and later DB6 models that followed. The Mark III's tube frame was abandoned for a steel platform, designed by Harold Beach, while the bodywork was styled by Touring of Milan using their vaunted Superleggera construction process, with hand-formed aluminum alloy panels over small-diameter steel tubing.

Tadek Marek designed a new engine, said to be inspired by Jaguar's DOHC XK engine, though cast from aluminum and more refined with prodigious torque. It was based on the DBR2 racing motor and was capable of propelling the DB4 to 141 mph, with four-wheel disc brakes to bring it down from speed. The prototype was taken to Brown's farm for him to test in 1957, and, with typical understatement, he pronounced it “a very promising motor car.”

As the DB4 underwent numerous running changes throughout its five-year lifespan, the AMOC Register has separated DB4s into five series, which roughly correspond to the continuous running changes during production. To many, the most desirable was the Series IV. These were the last of the “original proportion” DB4s. They featured a new grille with seven vertical bars, and the rear lights were recessed into the bodywork, while the car's bonnet scoop was lowered; all features which survived through the DB5.

Registered new in 1962 in Birmingham, England as 484 FOJ, this Aston Martin was originally finished in Aegean Sea Blue with White Gold Connolly leather interior. It was bought by the Dunnett family, who owned a respected bakeware company. Early maintenance records from Aston Service of Dorset extend to 1968, with a new clutch fitted at 56,195 miles. The second owner of record was Mr. Gee of High Wycombe, Buckinghamshire, after which the DB4 was believed to have been sold to Northern Europe and subsequently converted to left-hand drive.

In 2006, Alex von Mozer of Sassenheim, The Netherlands, shipped the car to Autosport Designs in New York to have it serviced prior to sale to an American customer. The odometer indicated 77,575 miles at the time and still retained its numbers-matching drivetrain. The DB4 was then acquired by Michael Sanford of Montauk, New York, who acquired it in April of that year. He commissioned extensive improvements, including body and paintwork, wiring, steering and suspension, new brakes, and tires. A modern R134 air-conditioning system was fitted, along with an alarm system and fire extinguisher. Accompanying receipts for the work extend over three years and totaled just over $64,000. The odometer indicated 78,990 miles at completion.

Mr. Sanford sold the DB4 in July 2011, a pre-purchase examination by Aston Martin restoration specialists Steel Wings, then of Hopewell, New Jersey. The report described the car as a good unrestored driver with a pleasantly patinated interior. The suspension had already been upgraded to a Steel Wings handling package and the engine ran well, pulling strongly through the rpm range with no hint of overheating under extreme conditions, while the gearbox shifted smoothly.

This DB4 has recently had a cosmetic restoration including a complete repaint in the original color Aegean Blue and a new correct Connelly White Gold leather interior with Wilton wool carpet. The past owner has enjoyed this DB4 over the past few years of ownership in the Los Angeles area. After it was inquired, it was driven from Monterey to L.A. with great satisfaction due to its sparkling performance and superb air conditioning!

Complete with a tool roll, and recent restoration invoices. This is an exciting, well-maintained DB4, that is a proven, reliable, sorted driver, finished in its attractive original color combination.

History Series DB4s
There were five "series" of DB4. The most visible changes were the addition of window frames in Series II and the adoption of a barred (rather than egg-crate) grille in Series IV. The Series III cars differed from the earlier ones in having taillights consisting of three small lamps mounted on a chrome backing plate. Earlier cars have single-piece units and the last Series V cars of September 1962 have similar taillights but recessed. The Series V also has a taller and longer body to provide more interior space, though the diameter of the wheels was reduced to keep the overall height the same. The front of the Series V usually was of the more aerodynamic style as already used on the Vantage and GT models, a style that was later carried over to the DB5 cars.