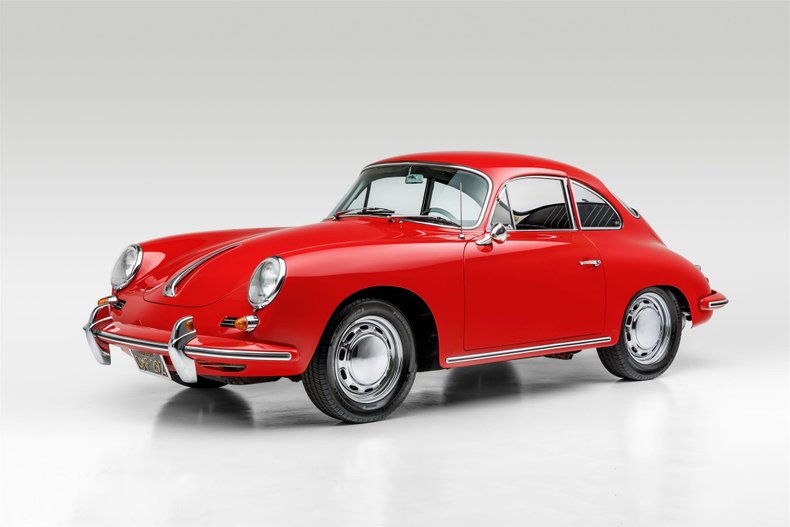 According to the Certificate of Authenticity, this 356C was ordered in Signal Red (color code 6407) with a Black (color code B) Leatherette interior. This 356 has been exceptionally well-maintained, solid, and rust-free. The 1600cc engine is in excellent running condition producing 75 horsepower with a 741 manual 4-speed transmission and four-wheel disc brakes. Original options include: chrome wheels, flat hub cabs with no crest (early production September to December of 1963), Blaupunkt Frankfurt AM/FM radio (currently with aftermarket radio), 2 load speakers, an antenna, rear luggage straps, and retractable seat belts.

Original floor pans, paint is in exceptional condition with a few minor paint imperfections, beautiful interior with German square weave carpets. Noted to be restored by a well known 356 restoration shop in the Los Angeles area in the early 1990s. Three known owners over the last three decades from Tucson, Arizona to Newport Beach, California. Service records from 1999 to present. Complete with original keys, owner's manual, service book, and original tool kit. Great opportunity to purchase a great 356. The 356C is truly one of the BEST 356s to drive.

History
The 356 was a lightweight and nimble-handling rear-engine rear-wheel-drive 2-door sports car available in hardtop coupé and open configurations. Engineering innovations continued during the years of manufacture, contributing to its motorsport's success and popularity. The last revision of the 356 was the 356C introduced in September of 1963 for the 1964 model year. It featured disc brakes all around with a 75-horsepower engine.