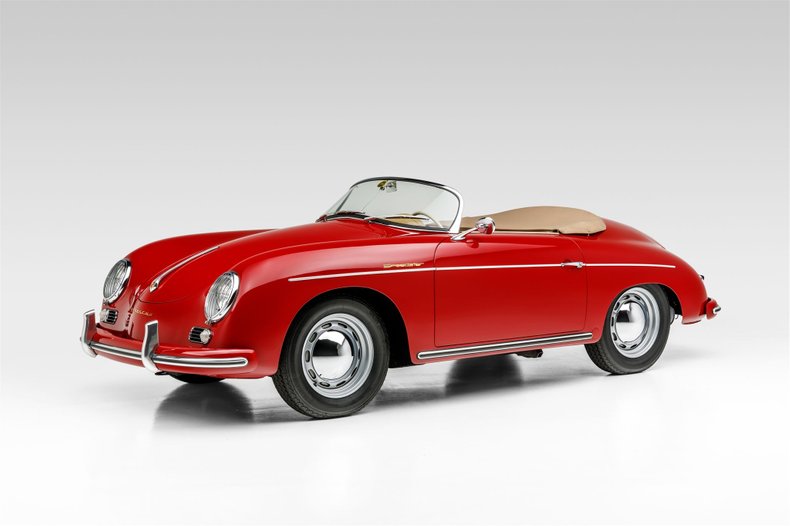 Only one owner for the past sixteen years! European Collectibles sold this Speedster to the current owner March of 2004. The restoration was done over several years from 2004 to 2008 in Southern California. The paint and bodywork was done by Hung Luu Auto Body/Paint Restoration located in Pasadena, California who has had a number of Best-in-Show (Street Category) wins at the 356 Club's Concours d' Elegance. Hung Luu was the main body man at Pino's in Pasadena. Angelo Pino was a world-famous craftsman and restorer of Porsche Parade winners. The body was stripped to the steel, media blasted, metalwork was performed, and the body was prepped and painted to full show-quality condition; $17,650 was spent. A new tan interior was installed with German square weave carpets, a soft-top, and boot cover, supplied by Autos International. The chrome was re-plated by Christensen Chrome Plating and rubber components were ordered from International Mercantile.

Additional parts were purchased from Stoddard Porsche Parts and Sierra Madre Collection Porsche Parts. In 2006, the engine had a lot of failing gasket leaks, and not knowing the condition of the engine, the owner had the engine disassembled by Foreign Machine Services in Pasadena, California, and thoroughly inspected. Foreign Machine Services is a machine shop for many of the Porsche mechanics in the area, including Rusnak Porsche. Jim, the owner of the firm and a friend of the owner, found everything to be in good shape and reassembled it with new gaskets and bearings. Markham Motors rebuilt the transmission with all new synchromesh and replaced the 2nd gear in 2008. Four new Vredestein tires were also installed in June of 2019.

This Speedster has been driven to local California Porsche events over the years and has been shown time and time again with multiple wins. It is in beautiful overall condition and has been well cared for by an active Porsche collector; it is ready to be driven anywhere!

According to the Certificate of Authenticity, this Speedster was originally finished in a rare Polyantha Red (color code 5602) with a Black interior. However, the owner preferred a tan interior. In absolutely superb condition, ready for any concour event, or to just drive and enjoy! Offered with tools, jack, books, side curtains, boot cover, owner's manual, receipts of the restoration, and Certificate of Authenticity confirming matching engine. Truly a rare find!

By 1950, a much-improved version of the Porsche 356 built-in Zuffenhausen, Germany was being sold in America. Early U.S. importer, Max Hoffman, was responsible for the most-iconic 356 body style, the Speedster, which was a rather stripped down and basic $2,995 version of the car with racing-style bucket seats, removable side curtains instead of roll-up windows, and a low windshield that the weekend racers who favored the model could easily remove.