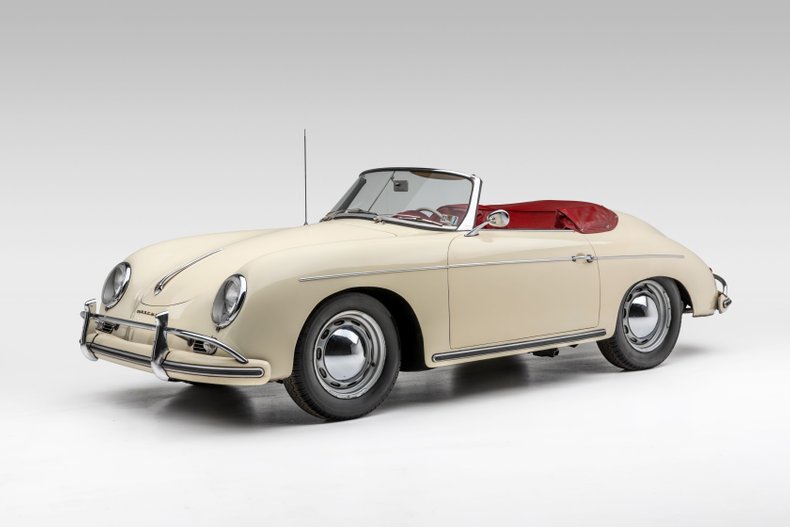 A true survivor with only two (2) owners, finished in its factory color combination of Ivory (5704) with Red upholstery. A very honest and original 356 with some original paintwork, excellent gaps, and no accident damage. All of the original trim, brightwork, and badges exhibit just the right amount of patina. The front and rear decks display “99” stampings, which indicates matching panels. Preservation class interior features original; door panels, carpets, front seats, dash, and boot cover are all in great condition. The undercarriage is solid and rust-free with original floor pans, closing panels, and battery box.

Powered by a matching driveline, the 1600cc Normal engine has plenty of power with 60 horsepower paired with a 4-speed manual 716 transmission. The four-wheel drum braking system has been completely rebuilt with new; master cylinder, brake lines, wheel cylinders, brakes shoes, and the drums have been turned. All four 4.5” x 15” Lemmerz rims are date coded (1 of 59) with four matching date coded (2 of 59) hubcaps. Offered with the Kardex, spare tire, jack, boot cover, tonneau cover, partial tool kit, original set of keys, original books including; Porsche Service Book, Driver's Manual, and the Operating Instructions for Opening and Closing the Convertible-Top. Extraordinary opportunity to purchase a true time capsule with incredible patina.

On September 23rd, 1959, Mr. Bob F. Henninger from Pittsburgh, Pennsylvania, took delivery of his 1959 Porsche 356A Convertible D from Hoffman Motor Car Co, in New York, New York and owned this Porsche for 18 months. Henninger traded his 356 in for a 1960 Pontiac Leman to Palmer Pontiac. The second owner, Daniel Piesik also from Pittsburgh, Pennsylvania area, purchased this 356 April 1961 and has owned the 356 Convertible D for 59 years! We have an amazing letter from Dan Pieik sharing his ownership history!

History
In July 1958, Porsche sent a letter to all its foreign representatives, stating that the four-year-old, bare-bones Speedster, which had been designed specifically for the Western markets of the United States, had not been well-received elsewhere. A new model was forthcoming for 1959, and it would be manufactured by Karosseriewerke Drauz, of Heilbronn.

This would be the Convertible D, which was introduced as an interim step before the arrival of the 356 B Roadster in 1960. The new ConvD would offer buyers Speedster-like styling, but it added such amenities as a wind-up door glass in place of side curtains, a taller windshield, a better taller top, and a more luxurious interior with coupe seats standard. New and larger teardrop-shaped taillights would replace the earlier “bee-hive” style lamps, and U.S. cars were fitted with front and rear bumper guards and over-riders. Porsche sales literature described the new Convertible D as “a dynamic car of beautiful proportions. Extra light and low in design for competition and pleasure driving.”

Only 1,331 Convertible Ds were built between August 1958 and September 1959, with nearly all being fitted with either the 60-horsepower Normal 1600cc engine or a special ordered 75-horsepower Super 1600cc engine. With a curb weight of less than 2,000 pounds, the Convertible D could reach 60 mph in a little more than 14 seconds in Normal form, and it was capable of topping 100 mph. With relatively quick steering (2.3 turns lock to lock), handling was very good, and the large four-wheel drum brakes were quite effective.