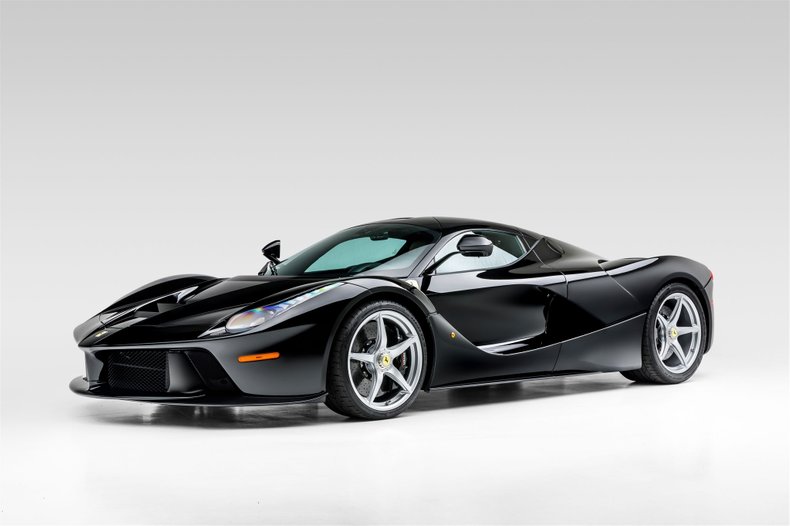 European Collectibles is very proud to offer for sale this 2014 Ferrari LaFerrari. The example offered here for sale was among the first to arrive new in American and was delivered to its first owner, casino mogul Steve Wynn, in his traditional color combination. This LaFerrari is believed to be one of only a few examples finished in this color combination of Nero DS paint with a Cuoio interior. The car is further outfitted with Black brake calipers with silver wheels, offering a subtle yet menacing presence. Inside, the Tan leather interior is accented with yellow digital instrumentation, including its odometer with a mere 413 miles that it has covered since delivery.

The LaFerrari was immediately compared to those hypercars from England and Germany. The McLaren P1 and the Porsche 918 feature hybrid powertrains that can motivate them on electric power alone. The LaFerrari's electric motor exists to support the 6.3-liter V-12, not to provide electric driving. Functioning like the Kinetic Energy Recovery System (KERS) used in Formula 1 cars, the LaFerrari harvests kinetic energy produced when the Brembo carbon-ceramic brakes are applied, stores it, and reuses it when the driver requires additional power from the V-12 combustion engine. The power boost adds 161 bhp to the 6.3-liter V-12's 789 bhp, for a system output of 949 bhp. The seven-gear F1-style dual-clutch transmission flips through the cogs quickly, without a hint of low-speed hesitation. Additionally, the LaFerrari's hybrid battery pack can be topped off at any household charger.

The car has been recently serviced, including a replacement of the KERS battery which totaled over $160,000 USD in receipts. It comes with matching Tan luggage, owner's manuals, 2 keys, battery charger and case, battery charger mount, front license plate bracket, service receipts, and car cover. Also documented by the Ferrari Factory with its Special Series Yellow Book. This example represents an incredibly rare opportunity to acquire a truly exceptional one-off USA delivered LaFerrari which sets it apart from all the others.

At the 2013 Geneva Salon, Ferrari stole the show with the all-new LaFerrari, the latest model in their famed supercar series. Though Ferrari billed the car as the successor to the Enzo, it had far more in common with the FXX. Behind its passenger compartment and within the F1-style carbon-fiber monocoque structure sat the FXX's 6.3-liter V-12. The LaFerrari's lines echoed its predecessor, albeit with softer lines in contrast to the comparatively brutal Enzo. Flavio Manzoni from Ferrari's in-house design team is credited with its design, which will surely go down in history for vaulting the automaker into a new era.

By the numbers, only 499 LaFerraris were built for the entire world. Production of the hardtop started in mid-2013 and ceased just after New Year's Day 2016. Ferrari offered the car to only its committed clientele. Not only were LaFerrari owners loyal to the brand, but they also constituted an ultra-elite upper crust of Maranello's faithful.