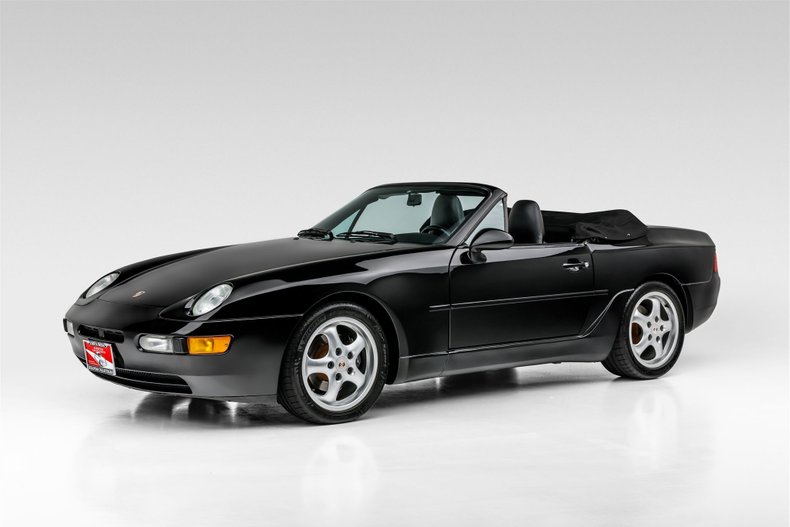 Originally sold by Park Place Porsche in Dallas, Texas, and has spent all of its life in Texas, this 968 Cabriolet is finished in a classic color combination, Black over Black. Extremely well cared for and everything works as it should with only 72,638 miles. 0-60 mph in 6.3 seconds with a top speed of 156mph. Engine runs very strong with smooth shifting manual 6-speed and hydraulic clutch. The Interior is in great condition with an upgraded Blaupunkt AM/FM CD radio and Bluetooth (the original Porsche CR-1 radio is included). Exterior paint is very nice and shows well, the top is in good overall condition. Recently installed NEW: front struts, rear shocks, new battery, front and rear brake pads, and brake rotors. 17-inch five-spoke wheels with Michelin Pilot tires 205/45ZR17 front & 225/40ZR17 rear. This was the last year of production of the 968 model. One of only 366 Cabriolets built-in 1995, these are very rare (low production) and are going up in value.

The 968 was wrapped in new bodywork that was the product of original 924 designer Harm Lagaay, with updated styling that drew from the 928 at the front, and was more integrated than its 924/944 predecessor at the rear. Like the 944S2, the 968 was also available as a cabriolet with a neatly done power top. On the performance side, the 968 could rip off a 0-60 sprint of 6.3 seconds with a 156-mph top speed. Handling was very forgiving, confidence-inspiring, and predictable. The 968 has proven to be reliable as well. The 968 offered here is one of just 366 such cabriolets shipped to North America in 1995.