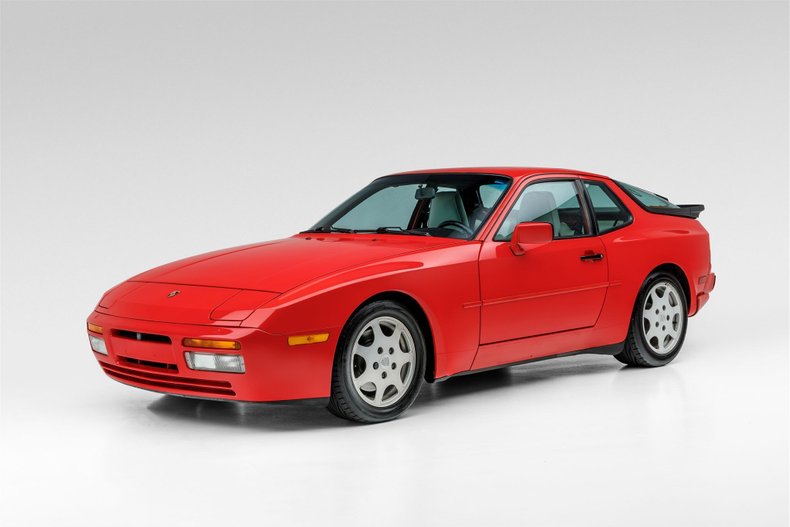 Finished in Guards Red with a linen and black partial leather interior, original paint as well as a beautiful original interior in amazing condition.

Built to the same specifications as the previous model year's Turbo S, the 1989 Turbo is powered by a 2.5 liter turbocharged inline 4-cylinder engine rated at 247 Horsepower and 258 lb.-ft of torque with a 5-speed manual transmission and limited-slip differential, making for a claimed 0-60 MPH in 5.7 seconds. With unbelievable performance, it is truly remarkable to drive!

Complete with extensive service records dating back to 2005, owner's manual, Warranty & Maintenance book, clean Carfax, window sticker, Porsche Certificate of Authenticity, two sets of keys, air compressor, jack, and tools. The Turbo is up to date on all scheduled maintenance and is in fantastic driving condition. Do not miss this opportunity to buy the last year of the increasingly collectible 1989 Porsche 944 Turbo S.

The 944 Turbo S' suspension had the "M030" option consisting of Koni adjustable shocks at the front and rear, with ride height adjusting threaded collars on the front struts, progressive rate springs, larger hollow rear anti-roll/torsion bars, harder durometer suspension bushings, larger 26.8 mm (1.055 in) hollow anti-roll/torsion bars at the front, and chassis stiffening brackets in the front frame rails. The air conditioning dryer lines were routed so as to clear the front frame brace on the driver's side. The 944 Turbo S wheels, known as the Club Sport design, were 16-inch Fuchs forged and flat-dished, similar to the Design 90 wheel. Wheel widths were 7 inches (178 mm) at the front, and 9 inches (229 mm) at the rear with a 52 mm (2.047 in) offset; sizes of the Z-rated tires were 225/50 in the front and 245/45 in the rear. The front and rear fender edges were rolled to accommodate the larger wheels. The manual transmission (case code designation: AOR) featured a higher friction clutch disc setup, an external cooler, and a limited-slip differential with a 40% lockup setting. The Turbo S' front brakes were borrowed from the 928 S4, with larger Brembo GT 4-piston fixed calipers and 12-inch discs; rear Brembo brakes remained the same as a standard Turbo. ABS also came standard.

The 944 Turbo S interior featured power seats for both driver and passenger and a 10-speaker sound system and equalizer + amp was a common option with the Turbo S.

In 1989 and later production years, the 'S' designation was dropped from the 944 Turbo S, and all of the turbocharged iterations of the 944 featured the Turbo S enhancements as standard, however, the "M030" suspension and the Club Sport wheels were not part of that standard. The 944 Turbo S was the fastest production four-cylinder car of its time.