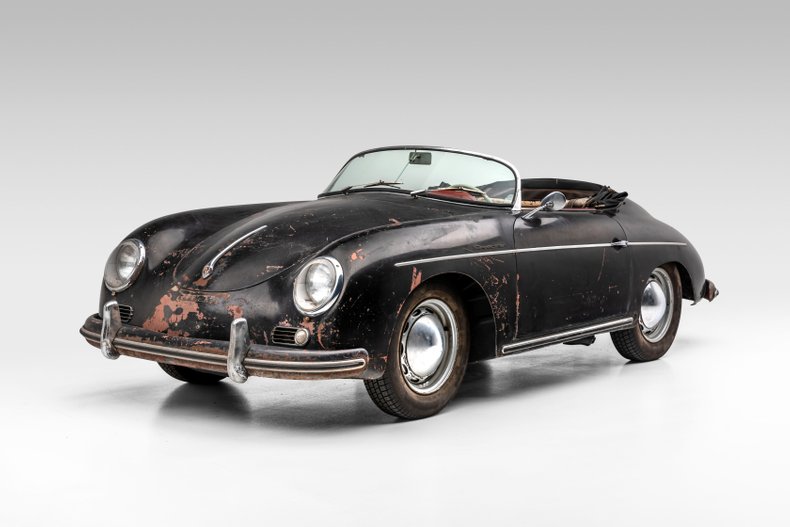 Garage kept under single-family ownership for over 40 years. In 2016, this Speedster was discovered in a farmhouse in a remote location in Illinois. It is a stunningly original example, with one thin re-spray over its entire life. Retains its original red interior and all of its factory components and hardware. When this Speedster arrived at European Collectibles the driveline was completely removed down to the tub. All of the rust issues were addressed including the installation of new floor pans, longitudinals and battery box floor to factory spec. The matching engine & transmission were completely rebuilt but all the engine sheet metal was left untouched to preserve the patina. The brakes were completely rebuilt including a new master cylinder, brake lines, wheel cylinders, brake shoes, and the drums turned. The suspension was rebuilt with new bushing and rebuilt link and kingpins.

European Collectibles has been at the forefront of preserving original Porsches and has supplied many customers with fantastically original cars such as this 1957 Porsche 356A Speedster factory Black with one thin re-paint over 40 years ago and miles of patina. Unrestored classics are at an all-time high and very difficult to find!

During 1950 Max Hoffman, the sole importer of Porsches in the USA was achieving excellent sales success for the company. He suggested to Ferry Porsche that he could do even better if he had a car that would compete with the imported English sportscars and fit the needs of the American market. He suggested this new model would resemble a small Jaguar XK120 and be available at a more competitive price than the current 356 range.

British cars like MG, Austin-Healey, and Triumph dominated the American sports car market. Max Hoffman was convinced that cost was the major barrier to achieving significant penetration of the sports car market in the USA. The basic 356 Coupe, for example, cost $300 more than the Jaguar XK120.

Porsche was keen to meet Max Hoffman's requirements but clearly, a hand-built car with aluminum coachwork was out of the question - it had to be a cut-down version of the 356 cabriolet and it had to be capable of being produced on the same production line as the other 356s. If they removed trimmings and weather protection they might be able to save weight as well as cost - after discussion between Porsche's Albert Prinzling and Max Hoffman in New York the concept of the Speedster was born.

The Speedster was to have a low, raked windscreen, which easily could be removed for weekend racing, bucket seats, and a minimal, folding top, and side curtains instead of wind-up windows.

Ironically the new Speedster kept the same Type 540 designation as the America Roadster but was designed by Reutter for minimum production cost. The spartan cockpit had lightweight bucket seats with fixed backrests. Instrumentation was limited to speedometer and temperature gauge. Technically a heater and tachometer were optional extras designed to keep the magic base price below $3,000. Exterior appearance was standard 356 from the waist down except for attractive full-length chrome side strips running neatly through the door handles.

Typical Speedster advertising by Hoffman in Road and Track, May 1955 - "Years Ahead in Engineering - Miles ahead on the Road." The advertised price was $2,995