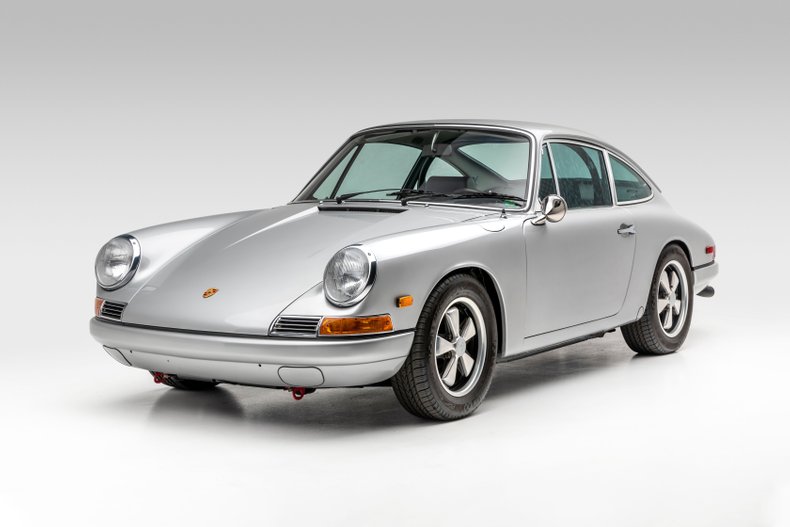 -One of 449 US Model 911 L Coupes built.
-One of 22 factory-built in 1968 with significant rally options.
-Fully documented history, including original window sticker.
-FIVA Certified and Shown at The Quail: A Motorsports Gathering.

This Porsche 911 L is one of 449 L models built and one of just 22 911s built in 1968 with enough rally options to be considered an actual factory-built "rally car." While rally is a broad term, it is used to identify sports purpose and competition options. This car was ordered new by twenty-nine-year-old Ernest Messenger from the Porsche dealer in Manhasset Long Island. His intention for this 911 was to build a car that could be used in rally racing on gravel, dirt, and snow. To this end, he specified an engine compartment light, traveling kit, traveling kit – special tool and parts, quartz fog light, roll bar, limited-slip differential, and full underside protection via stone guards for the steering unit, fuel tank, engine crankcase, and transmission.

Mr. Messenger flew to Germany, toured the factory, and took delivery of his new car on May 31, 1968. From there, he drove it around Germany, Switzerland, and Austria before shipping it home. Shortly after the car arrived in New York, Mr. Messenger realized that his new 911 was just too expensive to enter in rally competition as he had initially planned. Instead, he used it sparingly on paved roads in the Northeast until he sold it in 1985.

The second owner, Mr. Smith, of Long Island, kept the car until 2004 when he sold it to well-known Porsche enthusiast, Don Ahearn. At the time of sale, the car was very original and showing just 99,500 miles. During his three-year ownership, Mr. Ahearn rebuilt the car mechanically and uprated the original 2.0L engine to 2.2L "S" spec. He used new pistons and cylinders, Carillo rods, a new Elgin (906/S) cam, upgraded chain tensioners, and heads that were ported and flowed. The undercarriage, suspension, and trunk were refinished as well while the paint was left alone. During this rebuild, some period-correct racing accessories were installed, including an expensive 100L fuel tank, 911R oil catch tank, 7x15 911R rear wheels, passenger map light, and rally clock on the dash. A few years later, Mr. Ahearn sold the car to Canepa Design, who sold it to one of their customers in 2008.

The new owner drove it on two significant rallies and showed it at The Quail: A Motorsports Gathering, where it was displayed in a special tribute to Hans-Joachim Stuck. Like Mr. Ahearn, this owner proved to be an incredibly good caretaker. He devoted a significant amount of time to track down the original owner, Mr. Messenger. During a phone call, he described his careful selection of options and recounted his ownership of the car. During the conversation, Mr. Messenger remembered that he still had the original Porsche invoice and German registration. This was great news as the Certificate of Authenticity lacked option codes and many specific details regarding the extremely rare and desirable build specification. Mr. Messenger gladly mailed the documents to the owner, and they remain with the car today. With all of this in hand, as well as some correspondences with Jurgen Barth (who stated it was one of 22 factory-built rally cars for 1968), the owner applied and was granted a FIVA certification. With the FIVA identity card in hand, the car is eligible for some very prestigious events.

In 2012 the car was traded to the present owner and has been part of a significant collection of cars. In early 2019 he commissioned a full repaint in the original color of silver and had the Recaro sport seats trimmed in houndstooth. The rest of the interior remains original with excellent door panels, a good headliner, and an acceptable dash. Lightweight rubber mats line the floors, and the minimal carpeting is original. The unique rear storage compartment is intact, and the roll bar has excellent patina. Overall, this 911 L presents very well, has covered just 3,000 miles since the full mechanical rebuild and it runs and drives very well. The engine and transmission numbers match all documentation from Porsche, and the unique rally build has been confirmed.