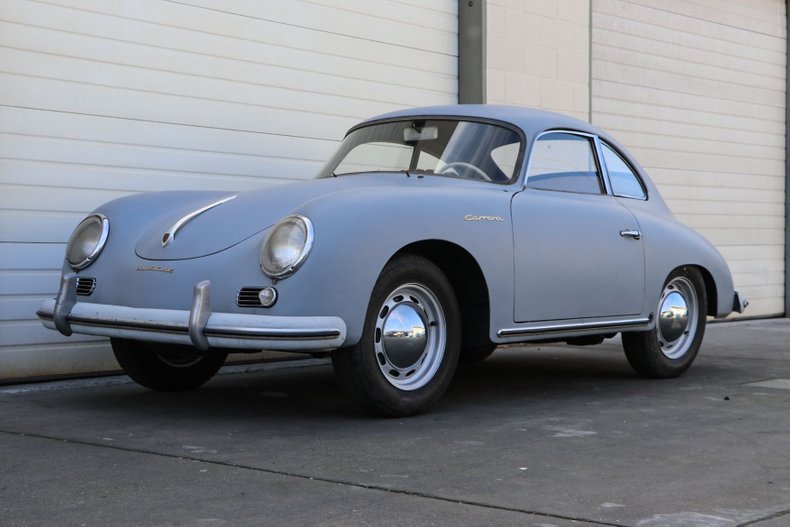 According to the Porsche Carrera Book by Rolf Springier & Steve Heinrichs VIN 56016 was built as a GS Carrera Coupe with engine number 90636, the body was finished by Reutter on March 29,1956, and the production was finished on May 18, 1956. Finished in Lago Green Metallic (606) with Light Beige (366) leatherette interior.

Same owner for the past forty-three years! Very rare color combination. The dash is very complete, finished in the original Lago Green color with the original Carrera gauges. The 356 is not running and driving and does not come with a Carrera engine or any of the Carrera components. Perfect for the Buyer who has a spare 4-cam engine and has been looking for a 356 Carrera!

The restoration was started but was never completed. The body has been metal finished and prepped for paint with excellent gaps and panel fit. The body, floor pans, and battery box are solid and rust-free. Matching decks and doors date coded fuel tank and fuel sender. The transmission number is 9412 and is stamped from the factory 356AGS. Original VIN plate by the fuel tank and doorjamb cover plate with VIN tag.

*A Porsche Classic Technical Certificate has been ordered.

Following the success of the original 356 (now known as the “Pre-A”), the 356A was introduced. It was part of the factory designation “Technical Program 1” (T1), followed by a revision in 1957 that resulted in T2.

Changes to the outside of the 356 were minimal, but a larger 1600cc engine was introduced along with revised suspension and wider tires. A keener eye will notice the addition of a rub strip below the doors and the use of enamel paint in place of lacquer. Interior changes were similarly minor with a flat-face dashboard following the contour of the now curved instead of the bent windscreen. Other options were the provision for a modern radio, courtesy dome lighting, and an optional dash clock.

The 356A was available with a total of five different four-cylinder engines, ranging from the 1300cc unit with 44bhp to the 1500cc Carrera GS that made 100bhp. From its inception, the Porsche 356 was engineered and constructed to make the most of its competition pedigree. This shows in abundance in the road manners and handling. Whilst other manufacturers were using increased capacity engines to gain performance, Porsche concentrated on lightness and engineering balance to achieve these aims, in many cases out-performing comparative machinery with sometimes twice the horsepower. Any 356A is a desirable car. The car's long-standing appeal has been enhanced over the years by competition success and the growth of the Porsche brand as a whole.