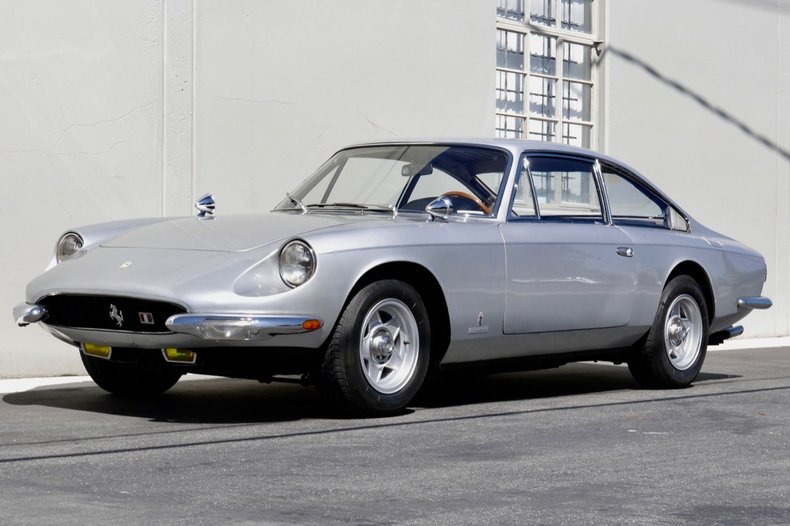 European Collectibles is pleased to offer this highly original 1968 Ferrari 365 GT 2+2 Coupe. This car was completed in April 1968 and finished in Argento Metallizzato (Silver Metallic) with a black leather interior, just as it is today. It is a left-hand-drive model, with air-conditioning that was built for the European market and was delivered new to the official dealer, Motor S.a.s. di Carla Allegretti e C., in Bologna, Italy. The car's first private owner was a Mr. Laboi also of Bologna. It was later exported to the USA and ended up in Beverly Hills, CA, with the same private owner from 1985 to 2010. During his ownership, the car was faithfully maintained and reportedly received a full engine rebuild. In 2010 the Ferrari was sold to another Southern California enthusiast who had the vehicle transported to Aspen for summer use. Over the next few years, the summer use resulted in very few miles, and the list of maintenance items grew. The decision was made to send the car to Dugan Enterprises in Oceanside, California for a full service.

Upon arrival in California, the spark plugs were removed for lubrication of the cylinders and the piston rings, before initial start-up of the engine. The carburetors were inspected and found to need annual cleaning and some essential service work, so all three were removed and overhauled using new gaskets and seals. Both valve covers were removed for inspection and adjustment of the valve clearances. Upon doing so, a few of the valve tips were found to have wear. Once the vehicle owner was made aware of the situation, he gave approval for Dugan to move forward with a rebuild of the engine's top end. Both cylinder heads were removed for replacement of all the intake and all the exhaust valves. The new valves were installed with new valve guides and seals. The cylinder heads were lightly surfaced upon completion of all the valve work to ensure an optimum sealing surface. Both cylinder heads had water jack plugs replaced as they showed some corrosion, then the cylinder heads were pressure tested to assure no leaks existed. The cylinder heads were installed on the engine using preferred head gaskets as some of the more common gaskets have been known to fail. The water pump was overhauled, replacing all of the seals, the gaskets, the spacer sleeve for the oil seal portion of the assembly. The water pump shaft was replaced during this service as the threads were found to be less than ideal. All of the engine fluids were drained, and all systems were flushed out before then new fluids were added. The brake and clutch hydraulic systems were bled after being filled with fresh fluids. The fuel tank crossover hoses were replaced as they showed signs of cracking from age and new filters were installed. The mechanical fuel pump was overhauled with fresh seals and a new diaphragm. The fuel pump pushrod was measured then adjusted to create efficiency in the mechanical fuel pump. The alternator was rebuilt, and a new battery and tender system were installed. The engine was assembled, tuned, and then the vehicle was test-driven with great results, feeling the intense power of this V12 engine. Upon completion of several drive cycles, the cooling fans were slow to respond to engine temperature, so both fan motors were inspected and cleaned, the fan switch was replaced, and then the electrical relays for the cooling fans were replaced to restore proper function and cooling of the radiator fans. The wheels were removed from the vehicle for fresh powder coating. The center hubs were removed from the wheels for re-plating, then new tires were installed on the wheels. The interior carpet showed some age, so new carpets were installed, and the interior received a thorough cleaning to freshen it up. The window motors and switches were cleaned and freshened up to restore smooth and consistent function. After the work mentioned above, this Ferrari is running and driving extremely strong. The receipts for the work performed during the summer of 2019 total over $35,000.

The paintwork is older and shows quite a bit of patina, but is free of any significant defects. The body is straight and solid, with only a few minor dings. The brightwork and glass are consistent with the paintwork, and the car has an overall look that is neither fresh nor shabby. The seats are very comfortable with good leather, and the carpets are new. This is a very honest example of a Grand Touring V12 Ferrari that is presented in its original colors, has a partial tool roll and retains its original "matching numbers" driveline.