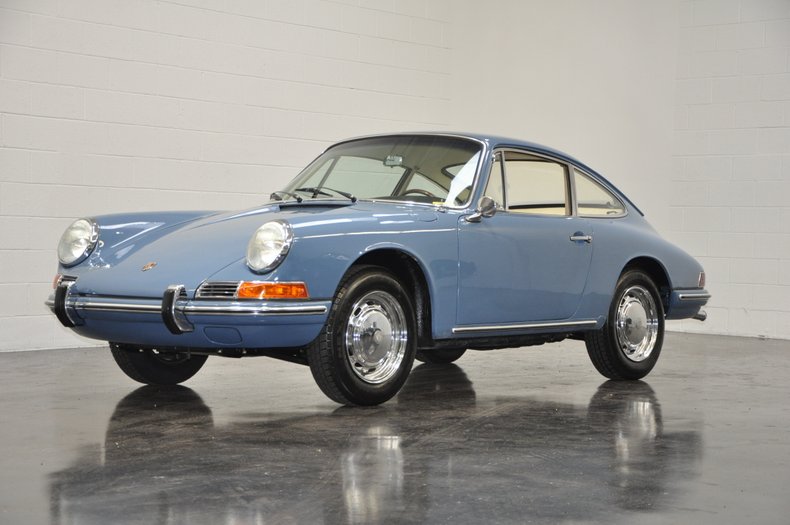 VIN 350608 was built in 1965 and is a part of the 912, “painted dash”, examples. Being one of the earliest of its kind produced, finding an original engine with one of these early classics is quite unique. The original engine runs very strong with a 5-speed manual gearbox and four-wheel disc brakes. Four-hole front horn grills and non-adjustable front suspension. Displays a beautiful color combination finished in a Light Blue with Beige Interior. The undercarriage has been fully detailed including the floor pans, front suspension pan, and all the suspension components. Truly an extraordinary 912 which is becoming very hard to find!

To preserve the original engine of this vehicle, it was sent to a well-known mechanic, Harry Pellow, who was known as the “maestro” of Porsche engines. Mr. Pellow refurbished the engine in late 1988. The beige interior of the vehicle has been completely reupholstered by Auto's International in Solano Beach, CA. Highlights of the restoration include; completely redone blue German square weave carpets, beige front seats, and dash top.
History

It is impossible to pinpoint when the 1965 912 model year ended and when the 1966 912 model year began. In 1965 operations at Porsche were such that any given supply of parts would be used until exhausted, and then replacements would sometimes be updated, but such changes did not strictly occur in accordance with each changing model year. Complicating matters further is that bodies for 912s were made both at the Porsche factory, and by subcontractor Karmann, thus allowing for a scenario where later cars with earlier features could be built at one facility, while earlier cars with later features could be built at the other. Confusing matters even further, is that because 1965 912s were only sold in Europe, most of the first 912s to arrive in the U.S. came via Porsche's European delivery program, whereby U.S. citizens could take delivery of new 912 at the Porsche factory, drive it through Europe for a few weeks, and then import it to the U.S. as a used car at a tremendous tax savings compared to a new car.