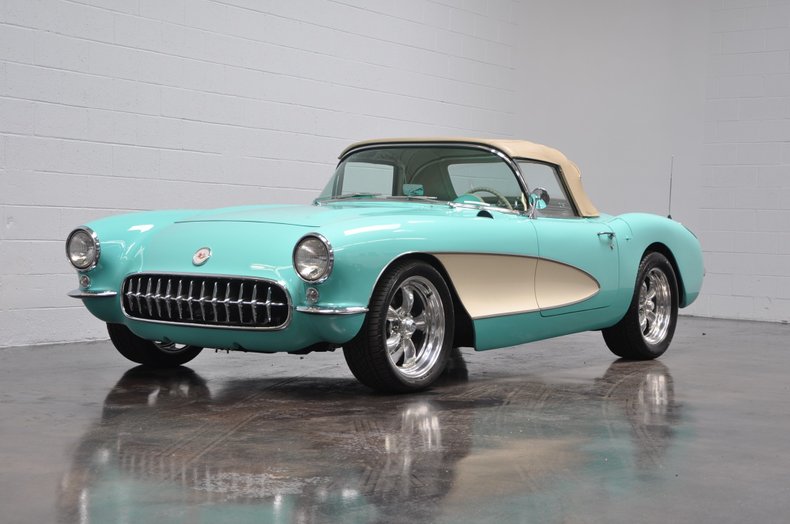 The Corvette was introduced for 1953 with wild styling and a blue flame six-cylinder engine. All '53s were white and production was limited to 300. In 1955 a V8 engine became optional and America's Sports Car was selling quite well. For 1956 the first generation of Corvettes received some styling updates that included more pronounced headlights and scalloped panels “coves” down the sides. In the rear, the fins were lost and the taillights became part of the rear fenders. All 1956 models received 265cid V8 engines and horsepower ranged from 210 with a single four-barrel carburetor to up to 240 with “dual quads.”

This beautifully restored 1956 Corvette was purchased in 2007 by a Southern California based collector. The car was in good condition, but the new owner was intent of having a fully restored and mildly updated Corvette. The car was sent to the specialists at Corvette Mike for a full restoration that included the installation of a 350cid/350hp ZZ4 engine. The owner was pursuing excellence and didn't moderate his choices by setting a budget, but choices back then were not as plentiful as they are today. In addition to a full mechanical overhaul, the bodywork was painted, chrome redone and new interior installed. A nice file of photographs taken along the way is included in the sale. By the time this restoration was finished late in 2009, the invoices totaled over $94,000. Six years later (2015), the same owner decided the ZZ4 and many other things could be replaced by even more modern parts, so back to Corvette Mike this car went. During this round, an independent front suspension with power steering unit was installed along with a new 430hp LS3 crate engine, three speed automatic transmission, power disc brakes (front), electric fan, upgraded radiator and a freshening of the interior that included custom gauges that cost over $4,000 (not including installation). This round of restoration work was completed in 2016 and cost $66,000, bringing the total restoration expenses to date to $160,000. As the car sits today, it is fully sorted and just received a service and inspection. The engine, which has fewer than 200 miles on it, makes great power and the automatic transmission is a welcome compliment in the modern world. Larger wheels and tires make good use of the extra horsepower and braking while the independent front suspension greatly improves ride quality and handling. This is a very well-built lightly modified Corvette that is ready to go and is offered at a fraction of the restoration cost.