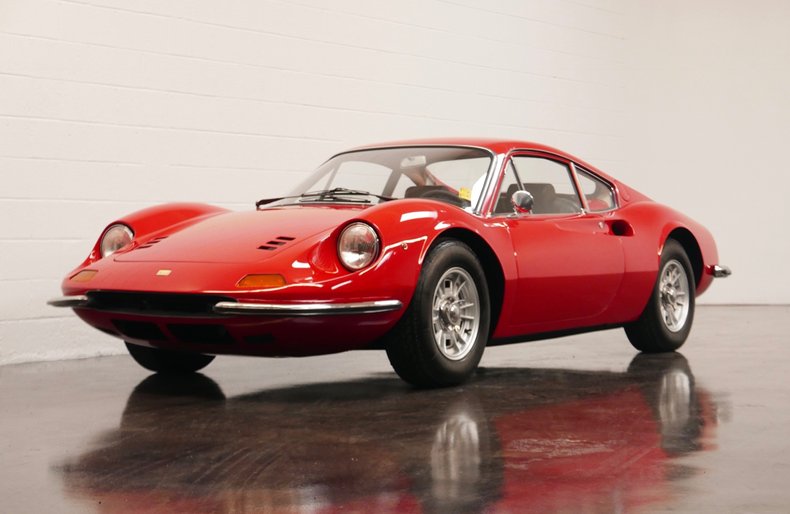 This desirable L-series Dino 246 was completed at the factory, February 24 1970 and delivered to Vittoria Catini from Milano, Italy who owned the 246 until 1975. The second owner imported the Dino into the USA in 1975. During the late 1970s and early 1980s, the Dino dropped a valve and the car was put in dry storage from 1982 until 1987. Robert Warren from North Falmouth, Mass. purchased the Dino in 1995 an owned it until 1996 when Willy Wijaya purchased it in 1997. European Collectibles purchased this 246 in 2003. EC went through a complete service, and sold the 246 to a local client in Los Angles who enjoyed and drove the Dino for over a 10 year period! In 2013 European Collectibles purchased the Dino back. L-Series Dino was fully serviced prepped for sale and was sold before it was advertised. The current owner has enjoyed the 246 but is sliming down his classic car collection.

Excellent body and panel fit! The paint is in beautiful condition with a new black interior with all the attributes of the L Series. The engine bay has been fully detailed to show condition along with the undercarriage. The 246 is extremely fun to drive and preforms very well with a strong engine and a smooth shifting 5-speed manual transmission.

The “L” model 246 is the most collectible of the 246 GT-246 GTS series having been made in the most limited numbers.

A dazzling Pininfarina-designed coachwork with the body built by Scaglietti, the Dino first debuted in design concept form, known as the 206 S Speciale, at The Geneva Motor Show in March 1965. Several years later, it entered series production with the 206-specification, two-liter engine. After a short run of 150 cars, the 206 GT was updated in 1969 with a larger 2.4-liter motor, which was a displacement that remained unchanged until Dino's discontinuation in 1974. The Dino demonstrated impressive balance during tight handling, thanks to its near-even weight distribution, which was a dividend of the race-proven rear-mid engine placement.

The 246 GT was ultimately built in three separate iterations, respectively known as the L, M, and E-series. The L-series served as the direct successor to the 206 GT and was built from March of 1969 until October of 1970. During this time, only 357 total examples were built, and they are considered by connoisseurs as the “bridge” between the 206 and 246 GTs. The L-Series kept many detailed from the 206 including, the more purposeful 206-style seats and dash, center-lock knock-off wheels, a deeper passenger foot well with a folding footrest, and numerous other small distinctions. More significantly, the L-series cars featured lightweight alloy doors and deck lids whereas the later M- and E-series cars used heavier all-steel bodies.