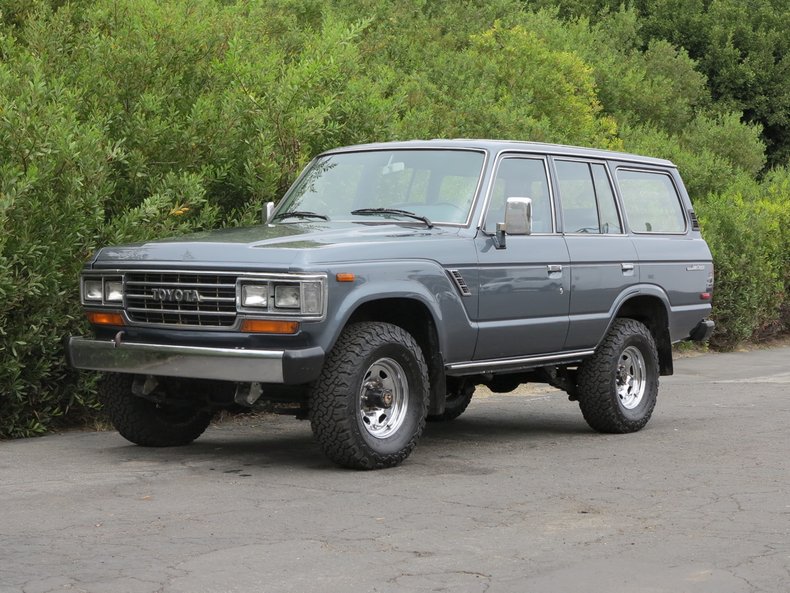 This 1988 Toyota Land Cruiser was sold new in California and remained here until 2006 when it made its way to Kentucky. Nine years later it returned to California and received a significant amount of restoration and service work. Our customer, who purchased the car from a reputable dealer in Grand Rapids, Michigan had the car shipped to California and instructed us to facilitate a restoration that would ensure reliable performance and presentable cosmetics without going so far that he would be afraid to use it. Upon arrival we inspected the car for rust and found nothing more than surface rust on the chassis and an excellent body and doors. All drain holes in the doors and tailgate were clean and clear. The chassis was checked carefully because we knew it was not worth moving forward with a restoration of this kind if there was rust in the suspension mounting points or the rear cross member. When driving off road, the rear cross member bears most of the responsible for keeping the chassis from twisting. With the body and chassis deemed worth of a rebuild, we moved on to a mechanical assessment. It was reported that the engine had been rebuilt less than 30,000 miles ago, but receipts were not provided. We checked compression and found surprisingly good numbers that supported the claimed rebuild - Cylinder 1. 175, 2. 170, 3. 170, 4. 170, 5. 175, 6. 180.

Next the suspension was removed for a complete overhaul that included the installation a full setup from Old Man Emu with +2.5 inch shocks that would raise the car. Everything was replaced including all bushings, U-Bolts and shackles. The front differential was disassembled next and was reassembled with new wiper seal kits and king pin bearings. The rear differential was fully disassembled, assessed and reassembled with new axle bearings and seals. Both differentials were cleaned during the disassembly and repainted. The drive shaft was reinstalled with new U-Joints front and rear. While the rear end was out, the fuel tank received an overhaul that included new lines, filler hose and a new pump. All emissions equipment was in good working order so passing California smog wasn't a problem. The engine received new drive belts, a fan clutch, radiator, upper and lower radiator hoses, valve cover gaskets, oil pan gasket, and a “tune up” that included a new distributor, air-fuel filter, oil, oil filter, new spark plugs, new wires and a throttle position sensor. The automatic transmission was serviced and the shifter bushings were replaced. The power steering pump and its plumbing and fluids were overhauled too. Moving through the systems, the push rod cover was replaced along with new brake lines, new tie rod ends, new front brake calipers and a brake master cylinder. Several hundred test miles were driven by Truck and Jeep Performance who performed all of the work and the new parts were fine tuned.

The above-mentioned work was completed less than 1,000 miles ago (summer 2016) and cost in excess of $15,000. Additionally, new LT31x10.50R-15 BF Goodrich All-Terrain T/A KO2 tires were installed and the AC system was charged and pressure tested. The tires are aggressive and complete the look, but perform fine on the road.

Finally, after all of the mechanical work was finished the car was repainted in its original color, graphite grey. Quite a lot of the glass and all of the exterior trim was removed prior to painting and the result is very good. The interior hasn't had much restoration work done. The seats are comfortable and all the gauges and stereo are working, but there is some wear and tear that if addressed could elevate this project from a “nice driver” to a “fully restored” category. Sadly, after all of this time, effort and expense, our customer lost interest and traded this Land Cruiser to us for an older Land Cruiser. The cost of restoration plus his original investment in the car was in excess of $40,000. We are offering it for far less and we are happy to assist with a long distance purchase or a local inspection and test drive. We know this car very well at this point. Please feel free to call or email with any questions or requests for more information.