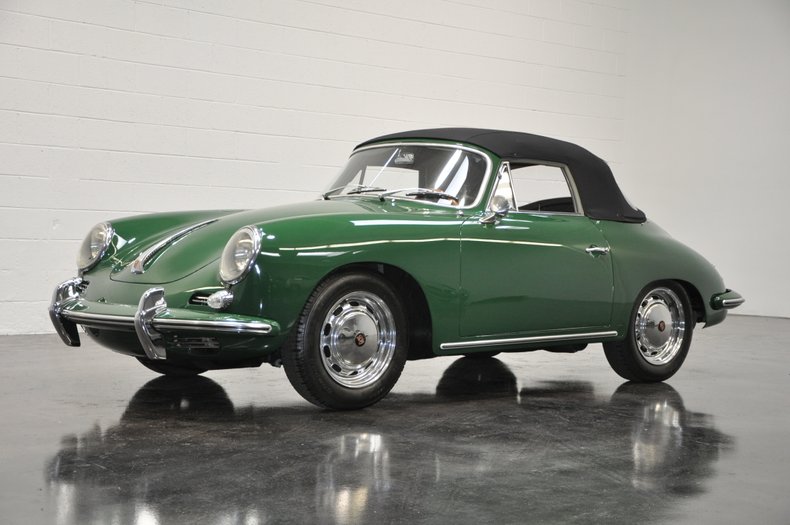 1965 Porsche 356 C Cabriolet
This is a very rare 356 C Cabriolet. Only 596 were built in this the last year of 356 production. Just 48 Cabriolets were produced after this 356. It was bought new by Irving Kingsford, Jr. in July of 1965 from Porsche Cars of Manhattan in New York City for $4,655.35. The dealer installed a Blaupunkt AM/FM radio and a side view mirror as the only options. The car was owned by Irving through 1995. Ron Ferrelli purchased this Cabriolet in 1995 and then had an extensive restoration done. It was in original condition before he started the restoration. This 356 is in excellent condition, finished in correct colors and runs exceptionally well. Beautiful leather front seats and a new black canvas soft top. If you have been looking for a great open 356 this would be a great one to own.

History
The last revision of the 356 was the 356 C introduced for the 1964 model year. It featured disc brakes all around, as well as an option for the most powerful pushrod engine Porsche had ever produced, the 95 hp (71 kW) "SC". Production of the 356 peaked at 14,151 cars in 1964. The company continued to sell the 356 C in North America through 1965 as demand for the model remained quite strong in the early days of the heavier and more "civilized" 911. The last ten 356s (cabriolets) were assembled for the Dutch police force in March 1966 as 1965 models.