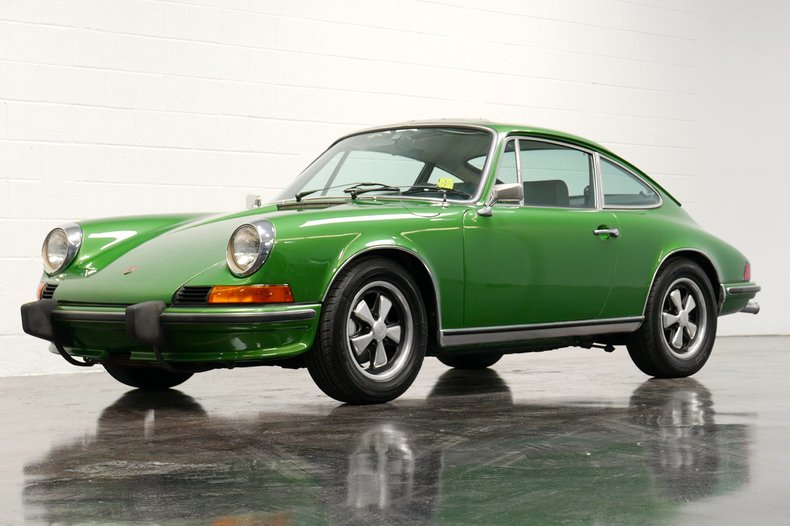 This 1973 Porsche 911T was completed at the factory in April of 1973 and shipped to Tampa, Florida where it was sold to its first owner, the Baldwin family, on May 14, 1973. This highly optioned Porsche was originally finished with Metallic Green Paint and fitted with a full Leather to Sample interior also in green. Additional options are below:

Stamps in the service book confirm that the 1,000 and 10,000 mile services were done at the original selling dealer, Temple Porsche Audi, in 1973. By their third service, February 1974 (13,845 miles), they had relocated to Mesa, Arizona and were using Johnson Bozzani Porsche Audi. Later that year (1974) the Baldwins traded their Green Porsche to Beverly Hills Porsche where it was sold to the second and only other owner this car has had. He was an Orange County California Sheriff who enjoyed the car on his days off and sometimes performed minor services himself. His dedication to the car was commendable and he kept a log of every service and parts purchase during his entire ownership which spanned from December 15, 1974 to November 16, 2016 - on month shy of forty years.

After being purchased by European Collectibles it was determined that the engine was worn out and needed a rebuild, so it was torn down, machined and completely rebuilt with all new pistons, valves and bearings. Prior to installation a new clutch was installed. The work took several months and cost in excess of $20,000. During the time this work was being performed all other mechanical systems were check and repaired as needed. The work was completed in July 2017 and just 150 break-in miles have been driven. The car runs and drives better than most we have ever had and is a favorite in our shop. The Green Metallic paint is in very good condition and works very well with the green full leather interior. This is a very highly optioned, matching numbers Porsche 911T with desirable CIS injection and host of desirable options including a sunroof and air-conditioning.