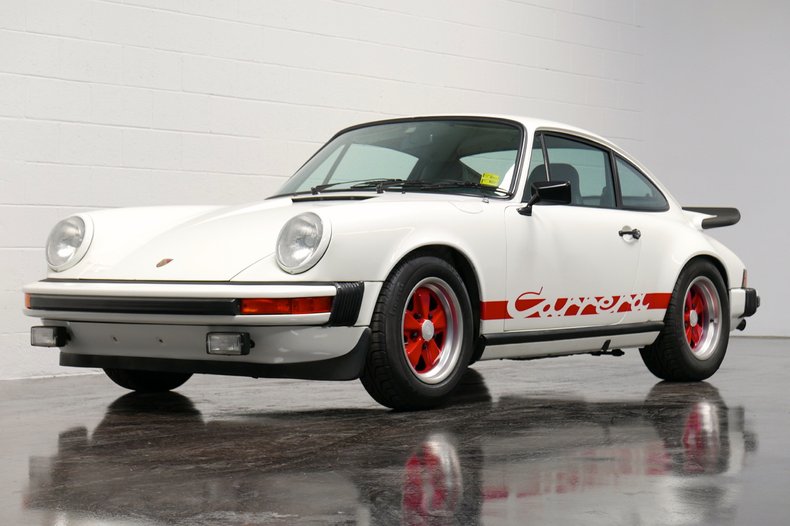 This 1975 Porsche 911 Carrera Coupe was built in September of 1974 and finished in Grand Prix White with a black interior. Options include equipment for the US market, Koni Shocks instead of Boge, Sport Seats and Pirelli Tires. With the aforementioned options and a lack of sunroof, it is clear this particular car was built for spirited driving. Being a US model, it was fitted from new with a 175 HP engine wth Bosch K-Jetronic fuel injection. The engine fitted, number 6450554, and 5-speed transmission, number 150650, are original to the car and match all factory records.

The early history is unknown, but a former owner and well-known Porsche locator recalls buying it from the second owner about ten years ago in very original condition and showing just 77,000 original miles. He owned it during the cosmetic restoration and recounts a detailed inspection and disassembly prior to being painted. He found no signs of accident damage or rust beyond a little in the passenger door. All glass and the engine were removed prior to painting and the work was done to a high level.. He sold it some years later in the midst of restoration to another well-known Porsche man who completed the reassembly and then developed an engine failure that resulted in a complete rebuild that has just been completed. Only three hundred break-in miles have been done and the engine is running well and making good power. All other systems, braking, transmission, lights and gauges are working correctly and this Carrera is a blast to drive.

This is an excellent driver with a matching numbers engine that has just been rebuilt and fitted with a very desirable pre-smog era exhaust system that sounds great and increases horsepower. The paintwork is very good, the floors, trunk and engine bay are all original and reflect how well this vehicle has been cared for over the years. Additional highlights include, 7x15 and 8x15 Fuchs that have been restored and fitted with new Pirelli P6000 tires, crowd favorite sport seats and very desirable H4 headlights. Included in the sale are an original owner's manual with pouch, tool kit, Certificate of Authenticity and collapsible spare tire with inflator. This is one of just 528 US model Carrera Coupes built for 1975.