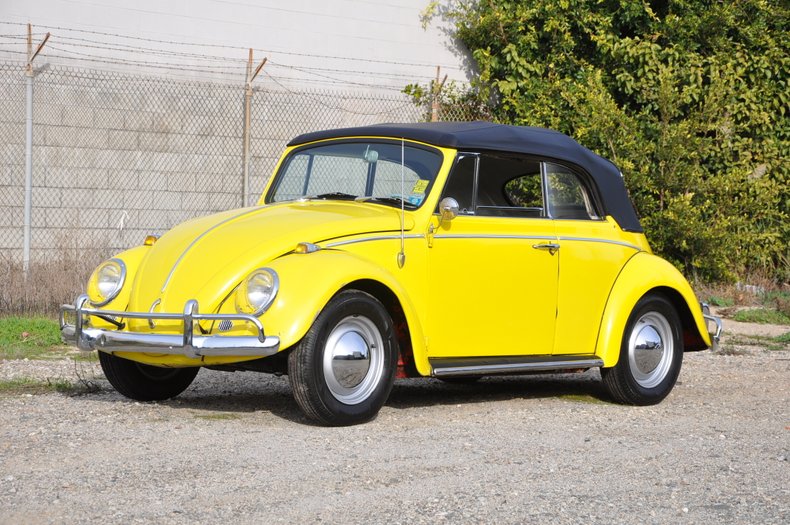 History
The convertible was more than a Beetle with a folding top. To compensate for the strength lost in removing the roof, the sills were reinforced with welded U-channel rails, a transverse beam was fitted below the front edge of the rear seat cushion, and the side cowl-panels below the instrument panel were double-wall. In addition, the lower corners of the door apertures had welded-in curved gussets, and the doors had secondary alignment wedges at the B-pillar.

The top was cabriolet-style with a full inner headliner hiding the folding mechanism and crossbars. In between the two top layers was 1 in (25 mm) of insulation. The rear window was tempered safety glass, and after 1968, heated. Due to the thickness of the top, it remained quite tall when folded. To enable the driver to see over the lowered top, the inside rearview was mounted on an offset pivot. By twisting the mirror 180 degrees on a longitudinal axis, the mirror glass would raise approximately 2 in (5.1 cm).

The largest change to date for the Beetle was in 1965: the majority of the body stampings were revised, which allowed for significantly larger windows. The windshield increased in area by 11% and was now slightly curved, rather than flat. Door windows increased accordingly by 6% (and door vent window edges were canted slightly back), rear side windows 17.5%, and the rear window 19.5%. The result was a more open, airy, modern look.