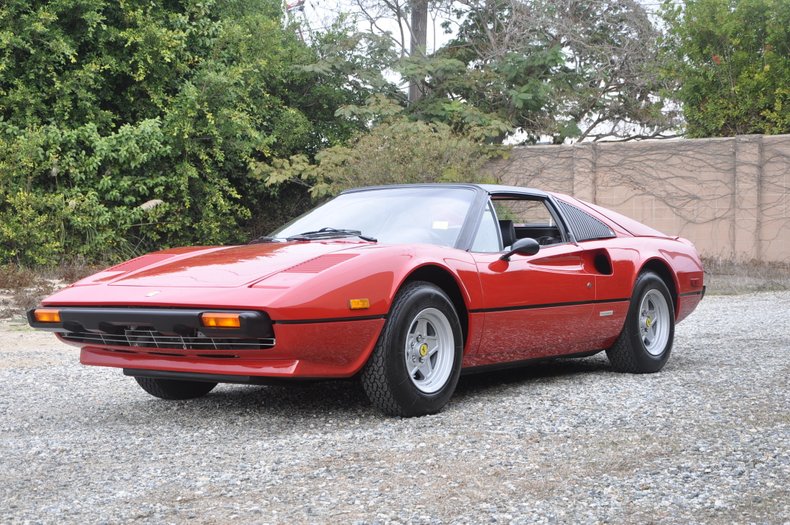 The Ferrari 308 GTB berlinetta and targa topped 308 GTS are V8 mid-engined, 2-seater sports cars manufactured by the Italian company Ferrari from 1975 to 1985. The 308 replaced the Dino 246 GT and GTS in 1975 and was updated as the 328 in 1985. The similar 208 GTB and GTS were equipped with a smaller initially naturally aspirated, later turbocharged 2-litre engine, and sold mostly in Italy.

The 308 had a tube frame with separate body. The 308 GTB/GTS and GT4 were mechanically similar, and also shared much with the original Dino. Both 308's sit on the same tube platform, however the GT4—being a 2+2—has a longer wheelbase. The engine was a V8 of a 90 degree configuration, with belt-driven twin overhead camshafts per cylinder bank. It was transversely mounted in unit with the transaxle transmission assembly, which was below and to the rear of the engine's sump. All models used a fully synchromesh 5-speed manual and a clutch-type limited slip differential. Suspension was all-independent, comprising double wishbones, coaxial coil springs and hydraulic dampers, and anti-roll bars on both axles; four wheel vented disc brakes were also fitted. Steering was unassisted rack and pinion.

The 308's body was designed by Pininfarina's Leonardo Fioravanti, who had been responsible for some of Ferrari's most celebrated shapes to date such as the Daytona, the Dino and the Berlinetta Boxer. The 308 used elements of these shapes to create something very much in contrast with the angular GT4. GTS models featured a removable roof panel with grained satin black finish, which could be stowed in a vinyl cover behind the seats when not in use.

Its F106 AB V8 engine was equipped with four twin-choke Weber 40DCNF carburettors and single coil ignition. European versions produced 255 PS (188 kW; 252 bhp) at 6600 rpm (7700 rpm redline), but American versions were down to 240 PS (177 kW; 237 bhp) at 6,600 rpm due to emissions control devices. European specification cars used dry sump lubrication. Cars destined to the Australian, Japanese and US market were fitted with a conventional wet sump engine from the GT4.

A notable aspect of the early 308 GTB was that, although still built by Carrozzeria Scaglietti, its bodywork was entirely made of glass-reinforced plastic (or GRP), allowing a very light weight of 1,050 kg (2,315 lb). This lasted until June 1977, when the 308 was switched to steel bodies, resulting in an overall weight increase of approximately 150 kg (331 lb). Standard wheels were 5-spoke 14-inch alloy. 16-inch wheels were made available later as an option, together with sports exhaust system, high compression pistons and high lift camshaft.

At the 1977 Frankfurt Motor Show the targa topped 308 GTS was introduced. Independently from the market, all GTS used a wet sump engine and were steel-bodied. European GTB models retained the dry sump lubrication until 1981.

European Collectibles is pleased to offer this all original 1978 Ferrari 308 GTS. It is completely original including paint and interior with very low miles. Complete with books and tools. Simply a stunning example!