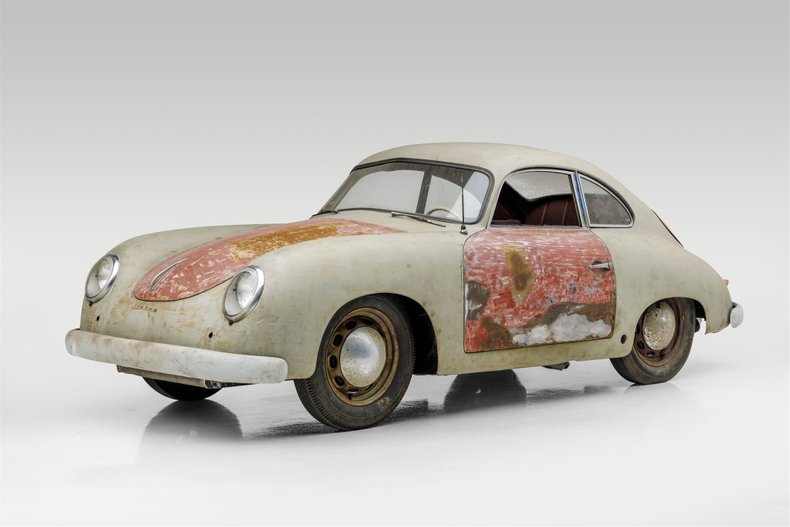 Very rare, early, 356 Pre-A, single-family ownership for over 36 years. This is a very complete bent-window coupe needing a full cosmetic and mechanical restoration. The exterior is complete including, decks, doors, bumpers, badging, glass, and four (4) 3.25” x 16” wheels. The decks and doors are original and retain the “36” number stampings. The interior features original seats trimmed in blue leatherette with matching corduroy inserts, a VDM steering wheel, and factory instrumentation. The undercarriage remains exceptionally straight with a replaced battery box and longitudinals.

On January 23, 1957, Richard H. Gaylord purchased one 1952 Porsche 356 Coupe for $2,229.92 from Manhattan Auto, Inc. in Fairfax, Virginia. Mr. Gaylord drove his 356 until the late 1960s before it was stored in his garage for nearly two decades. Photo documentation dated April of 1991 showcases the Pre-A in a project-like state just before Mr. Gaylord elected to begin a full restoration. Multiple pages of research and notes were taken by Mr. Gaylord to understand all the crucial elements that would eventually need attention during the restoration. Unfortunately, the task was too difficult to accomplish, and it was eventually sold to another enthusiast who carried the same ambition of completing a full restoration.

Mechanically, the driveline will need to be rebuilt and is powered flat-four engine paired to a 4-speed manual transmission and four-wheel drum braking system. Complete with the purchase invoice from 1957, Certificate of Authenticity, Kardex, jack, and spare tire. Originally finished in a stunning color combination of Fish Grey over Navy, this “bent-window” 356 Pre-A would make an ideal candidate for a concours restoration.

History
Simple, clean, elegant, and understated: that would describe the aerodynamic little Porsche 356 Coupe of the early to mid-1950s. While still utilizing some parts and design concepts originally created for the humble Volkswagen Beetle, by 1953 the 356 was showing clear signs of the steady development and evolution demanded by Porsche's designers and engineers. The new model was undergoing almost constant improvement as the factory strove to simplify the manufacturing process for these largely hand-built automobiles.