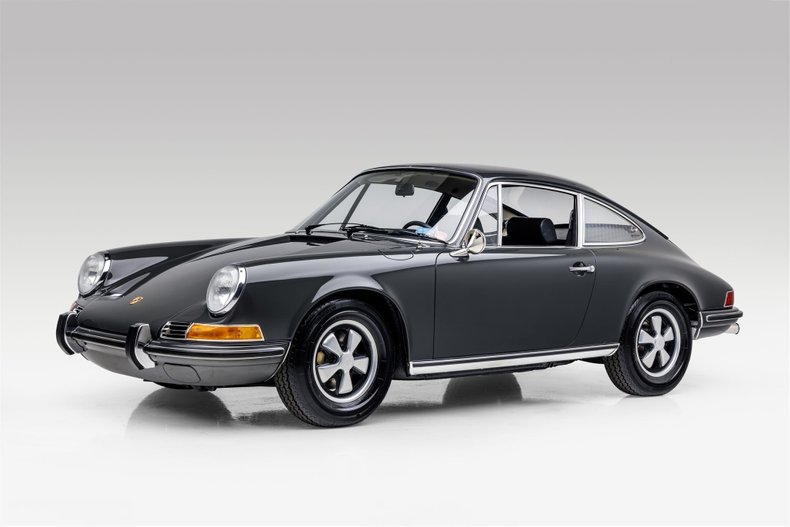 Incredibly well preserved one (1) owner 911T coupe, finished in an amazing color combination of Slate Grey over Black leatherette upholstery. The entire car was disassembled and was completely repainted and is in stunning condition with excellent gaps and panel fit. Still with the car today is the M470 Appearance Group option, which includes the gold “Porsche” nameplate and model number, aluminum door sills, 911S rubber moldings on bumpers, and aluminum rocker panels. The upholstery is all original except for new German carpets, incredibly well preserved with a leather-wrapped steering wheel, VDO instrumentation which has been restored, and a Blaupunkt AM/FM radio. Refinished 5.5” x 14” Fuch alloy wheels are fitted to new Sprint Classic Vredestein 185 HR14 tires. The undercarriage is solid and rust-free and has been completely detailed along with the suspension.

In accordance with the original window sticker, VIN 9110121687 entered through the port of New York and was distributed by Porsche/Audi Eastern Worldwide VW Corp. in Orangeburg, New York. Glen Porsche Audi, Inc. sold this 911T new to William Carr and it was originally finished in Burgundy over a Black leatherette upholstery. Equipment from the factory includes a 5-Speed 901 manual transmission ($90), a retractable antenna and speaker ($55), and the appearance group package ($465). The total suggested retail price with accessories was $7,076.00.

William Carr served in the United States Army as an engineer in the 854th Battalion. Due to his engineering background, Mr. Carr eventually found employment at IBM in East Fishkill, New York where he worked for the next 30 years. Always fond of the unique body styling and alluring performance the Porsche 911 had, Mr. Carr purchased this 911T new from Glen Porsche Audi in Middletown, New York. Evidence of Mr. Carr being the sole owner of this vehicle is verified by the registration, insurance cards, Texaco gas receipts, and the Certificate of Mr. Carr's death in 2021. Throughout his ownership, the vehicle was driven sparingly and stored for most of its life. When the vehicle was purchased by European Collectibles, it was thoroughly inspected for any signs of accident damage, rust, and the work involved in making it roadworthy. The body was completely rust-free with no signs of accident damage. The paint, while being original, was unfortunately impossible to preserve. European Collectibles determined that this 911 was an excellent candidate to receive a full exterior cosmetic restoration. The entire vehicle was disassembled, the body was blocked to achieve an even finish, and repainted in a beautiful color of Slate Grey. The exterior was then fitted with all new rubbers, grommets, and seals. In addition, the brightwork has been triple-plated to show quality. All the mechanical components including the engine, transmission, braking system, and electrical components were gone through and restored, or replaced, as necessary.

Mechanically powered by a number matched 2.2-liter flat-six engine (type 911/07) producing 125hp paired with a 5-speed manual 901 transmission and four-wheel disc braking system. Complete with original window sticker, Blaupunkt radio manuals, and light service history going back to the date of purchase. A unique opportunity to acquire a one-owner 911T that has been cosmetically and mechanically sorted.