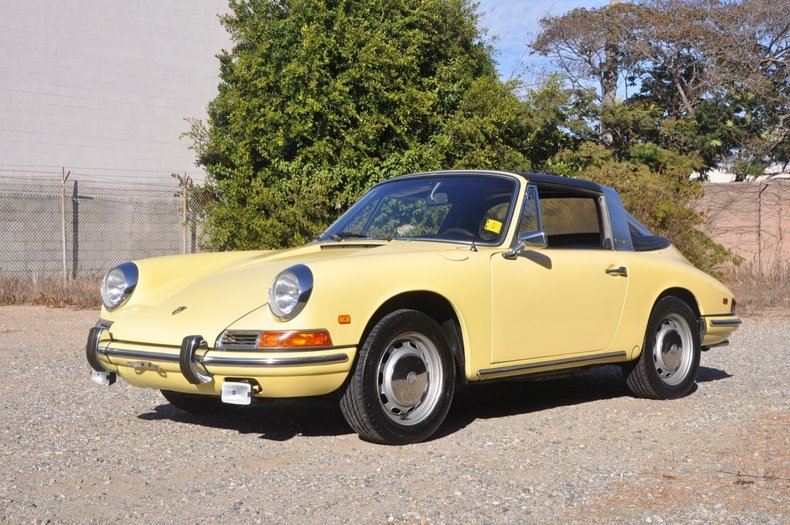 1968 Porsche 912 Soft Window Targa
Delivered in a beautiful color combination that is in very good condition. Excellent mechanical condition with original 1600cc engine and smooth shifting manual 5-speed gearbox. Solid undercarriage and a very straight body with NO rust issues. A very good investment that is very hard to find and is a pleasure to drive.

912 (1965–1969)
As production of the 356 model concluded in 1965, on April 5, 1965 Porsche officially began production of the 912 coupé. Styling, performance, quality construction, reliability, and price made the 912 a very attractive buy to both new and old customers, and it substantially outsold the 911 during the first few years of production. Porsche produced nearly 30,000 912 coupé units and about 2500 912 Targa body style units (Porsche's patented variation of a cabriolet) during a five-year manufacturing run. Production of the Targa, complete with removable roof and heavy transparent plastic rear windows openable with a zipper (later called 'Version I' by Porsche and the 'Soft-Window Targa' by enthusiasts), commenced in December 1966 as a 1967 model. In January 1968, Porsche also made available a Targa 'Version II' option ('hard window Targa') with fixed glass rear window, transforming the Targa into a coupé with removable roof.

The Type 912 was also made in a special version for the German autobahn police (polizei); the 100,000th Porsche car was a 912 Targa for the police of Baden-Württemberg, the home state of Porsche. In the April 1967 edition, the Porsche factory's Christophorus Magazine noted: "On 21 December 1966, Porsche celebrated a particularly proud anniversary. The 100,000th Porsche, a 912 Targa outfitted for the police, was delivered."