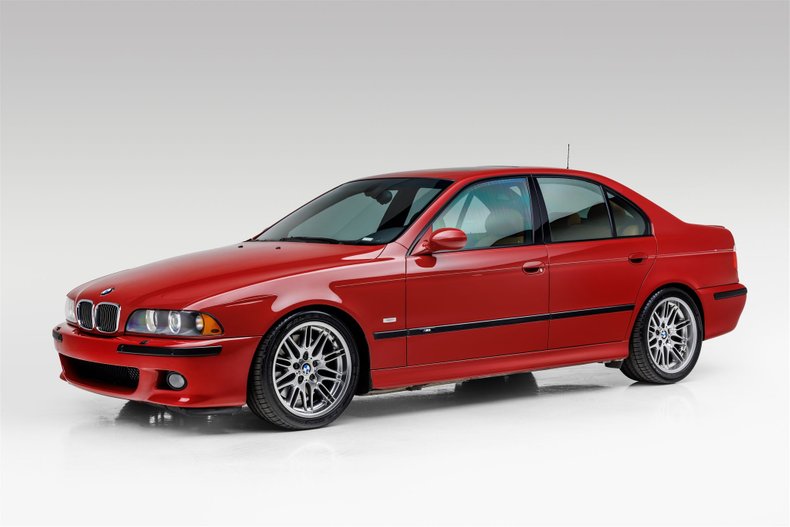 The paintwork is all original and in stunning condition. The upholstery is beautifully preserved and is trimmed in Caramel Nappa leather with burl walnut wood accents and an alcantara headliner. Additional equipment includes dual-zone automatic climate control, an onboard computer cruise control, an alarm system, six-disc CD changer, navigation, and M Audio with enhanced bass. Factory 18″ Style 65 wheels are wrapped with 245 40 18 front and 275 35 18 rear tires. Due to the excellent care and the dry California climate, the undercarriage remains in perfect original condition with no rust.

The E39 M5 is powered by the BMW S62 V8 4.9L engine, which generates a power output of 394 hp at 6,600 rpm and 369 lb⋅ft of torque at 3,800 rpm. The S62 engine has electronically actuated individual throttle bodies, an aluminum block and heads, variable valve timing (double-VANOS), and a semi-dry-sump oil system. The official performance figures are 0 - 60 mph acceleration time of 4.8 seconds and an electronically limited top speed of 155 mph. In testing, an unrestricted M5 reached a top speed in excess of 186 mph. The E39 M5 recorded a Nürburgring lap time of 8:20. Power is sent to the rear wheels through a Getrag 420G six-speed manual transmission and a limited-slip differential with 25% maximum locking. Braking is handled by four-wheel ventilated discs, and the car is equipped with Dynamic Stability Control (DSC), Servotronic power steering, and Dynamic Brake Control (DBC).

On July 4, 2002, the current owners from of Havasu, Arizona purchased this BMW from Coast BMW in San Luis Obispo, California with 7,633 miles on the odometer. The records on hand indicate that the M5 frequently visited California where it was strictly serviced by Harloff, Coast, Palm Springs, and Encinitas BMW. Recently, new tires were fitted, and a 4-wheel alignment was performed. A full service was just performed at Bullet Performance Engineering in Costa Mesa, California, replacing the thermostat, expansion tank, oxygen sensors, sway bar bushings, and serpentine belt, along with an oil and filter change.

Complete with owner's manual, dealer supplements, spare tire, tool kit, and a clean Carfax. A rare opportunity to acquire a well-preserved, dry M5 that is exceptionally straight and a rare color combination.

History
The E39 M5 arrived in 1999 for the 2000 model year, marking the first V-8 engine to be used in an M production car. And what an engine it is. The 4.9-liter naturally aspirated V-8—internally referred to as the S62—makes 394 hp at 6600 rpm and 369 lb-ft of torque at 3800 rpm. It is a righteous screamer of an engine right up to its 7000-rpm redline, and it could haul the stately German sled from 0-60 mph in under 5 seconds. With its variable valve timing for both the intake and exhaust cams, as well as individual throttle bodies for its octet of cylinders, this is among the finest engines ever to leave Munich's hallowed halls. But the M5 isn't just all ate up with motor. The only transmission available was a six-speed manual—a beefed-up version of the unit found in the BMW 540i. Even today the chassis feels stout and athletic, despite a touch of body roll. The interior is handsome, purposeful, and assembled with high-quality leather, wood, and plastic. The seats hug your love handles with firm, reassuring support. In 2000, Car and Driver called it “the most desirable sedan in the world.”