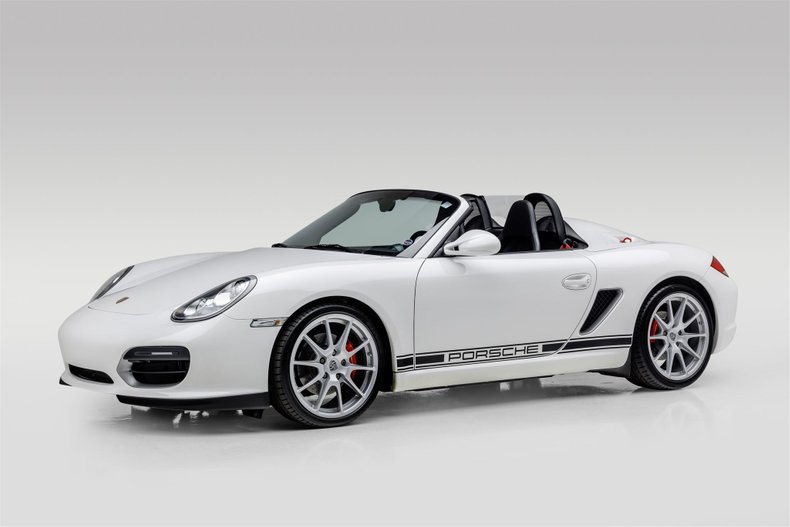 Weighing only 2811 pounds, the 2011 Porsche Boxster Spyder is the lightest production car that Porsche has produced in decades. This mid-engined roadster represents the true, purist form of the sports car - agile, powerful, open, and efficient. The maximum output is 320 horsepower with 273 lb.-ft torque. The combination of 10 more horsepower and 176 pounds less weight than the award-winning Boxster S, plus an all-new sports suspension that lowers the Boxster Spyder 20 mm, a lower center of gravity, a standard limited-slip differential, and exclusive wheels provides the kind of driving dynamics that back up the unique look. Aluminum door skins and lightweight interior door panels from the 911 GT3 RS contribute to the weight reduction.

The original purchase invoice on file indicates delivery by Motor Werks of Barrington Porsche on June 16, 2010, with a base price of $65,570.00. Finished in Carrara White over Black Alcantara upholstery. This configuration was optioned from the factory with A/C Delete, Radio Delete, Floor Mats, Fabric Door Opening Loop, Manual Two Panel Roof, Soft Top in Black, and a 7-speed Porsche Doppelkupplung transmission.

The current owner purchased this Spyder in 2018 with 7,011 miles from European Collectibles. Schneider Autohaus in Santa Barbara, California performed a 10K mile maintenance which included replacing the engine oil and filter, cabin filter, installing a sealing ring, and checking all the fluids. Mechanically, the Boxster Spyder features a 3.4-liter six-cylinder engine paired to a 7-speed PDK dual-clutch transmission, which produces a 0-60 time of just 4 seconds. A true, genuine, roadster sports car destined only to appreciate, this Boxster is a great valued opportunity.

Hard to believe but the Boxster line is 25 years old now. When the car launched in 1997, reviews were positive and constantly improved as this car never seemed to disappoint with regards to looks and drivability. With their mid-engine layout and nearly perfect 50/50 weight distribution, it quickly developed a dedicated following.

The 2011 Boxster Spyder was heavily praised by the automotive press upon its release. Road and Track referred to it as "the perfect sports car." and described its skidpad and figure 8 test results as "Ferrari 458 Italia numbers for less than a third of the price." Car & Driver praised the acceleration, reaching from 0-60 in an incredibly quick 4 seconds.