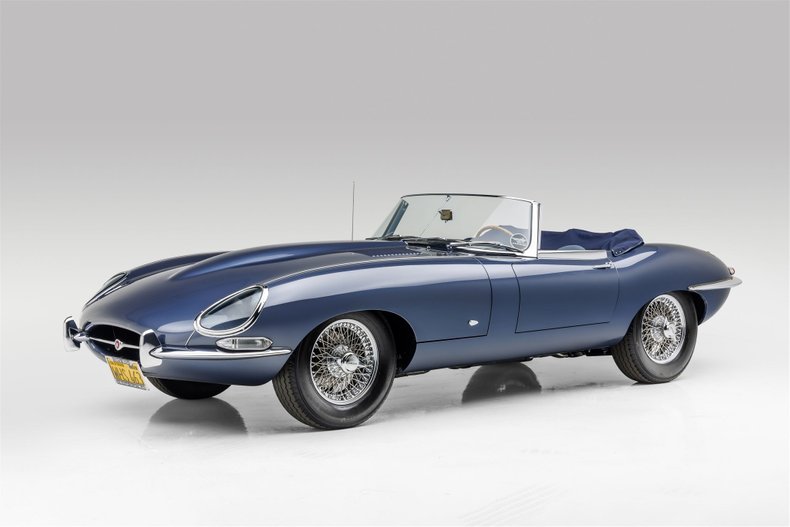 Early Outside Bonnet Latch E-Type Roadster which scored 100-points at the Jaguar Owners Club Concours finished in a stunning original color combination of Opalescent Dark Blue over Light Blue upholstery. At the beginning of the first series, XKEs featured outside bonnet latches, welded louvers, and flat floors. The paintwork is in pristine condition with perfect gaps and panel fit. The upholstery is in remarkable condition and features light blue Connelly leather upholstery and a dark blue canvas convertible top, as it had when it left the factory. The chrome 15″ knockoff wire wheels are mounted with Avon radial CR-6 ZZ 205 70 VR15 tires.

In recent years, the supply of highly original early E-Types for restoration has dwindled, so the discovery of an original low-mileage example was notable. Fortunately, it ended up in the care of an experienced Jaguar restoration facility, Classic Showcase, a marque specialist in Oceanside, California who preserved as much of the car's originality as possible. In 2014, they performed a comprehensive restoration to the highest level possible at no expense spared. Included in the restoration process, the vehicle has been completely dissembled, and the body was stripped to bare metal and placed on a rotisserie. It was then primed, sealed, and painted in its original color. All the mechanical and electrical were gone through and restored, or replaced, as necessary. The transmission, clutch, and hydraulic systems were fully restored or replaced, and the car has received all new rubber, grommets, and seals. In addition, the brightwork has been fitted, and triple plated to show quality. A complete new interior was fitted and installed using the correct English materials. The Roadster's parts and components have been restored in the proper colors and finishes as well, and NOS parts were used wherever possible.

Shown for the first time at the Jaguar Owners Club of Los Angeles annual Concours d'Elegance in 2014, this XKE scored 100-points proving its very high overall quality. A few weeks later, “Blue Diamond” won 1st in Class while at the San Marino Concour. Under the previous owner, an additional $23,000 was spent to further enhance this already spectacular E-Type after it was acquired in 2014. Improvements included the acquisition of the correct jack, tools, and show-quality manuals. Additionally, this E-Type was fitted with a Radiomobile radio and antenna, new-old-stock Jaguar seat belts, and year-of-manufacture license plates. Additional detailing included an expert color sanding and polishing, as well as an engine service. These efforts were rewarded with a 1st in Class win at the 2015 Hillsborough Concours d'Elegance. On October 8, 2021, over $10,000 was spent with the help of Vintage Auto Service in Oakland, California where they performed the following: installed a 4.2 transmission on a modified bell housing, changed the engine oil and filter, and detailed the engine and wheels.

Mechanically powered by the matching 3.8-liter inline six-cylinder engine paired to an upgraded 4-speed (Series I - 4.2) manual transmission (The original transmission is also included in the sale) and four-wheel disc braking system. Complete with two keys, Jaguar Overseas Distributor and Dealer handbook, owner's manual, and Manufacturer's Warranty card. An excellent opportunity to acquire one of the rarest early left-hand-drive E-types finished in a very desirable color combination and would make a fabulous acquisition for any Jaguar enthusiast looking for further display or private enjoyment.

History
The Series 1 was introduced, initially for export only, in March 1961. The domestic market launch came four months later in July 1961. The cars at this time used the triple SU carbureted 3.8 liter 6-cylinder Jaguar XK6 engine from the XK150S. The first 300 cars built had flat floors and external hood (bonnet) latches. These cars are rare and more valuable. The outside bonnet latch is the most sought-after of all the Series I E types. Only 500 external bonnet latch cars were made, of those, 385 were left-hand drive roadsters, 20 left-hand drive coupes, 91 right-hand drive roadsters, and 4 right-hand drive coupes. After that, the floors were dished to provide more legroom and the twin hood latches moved to inside the car. The 3.8-liter engine was increased to 4.2 liters in October 1964.