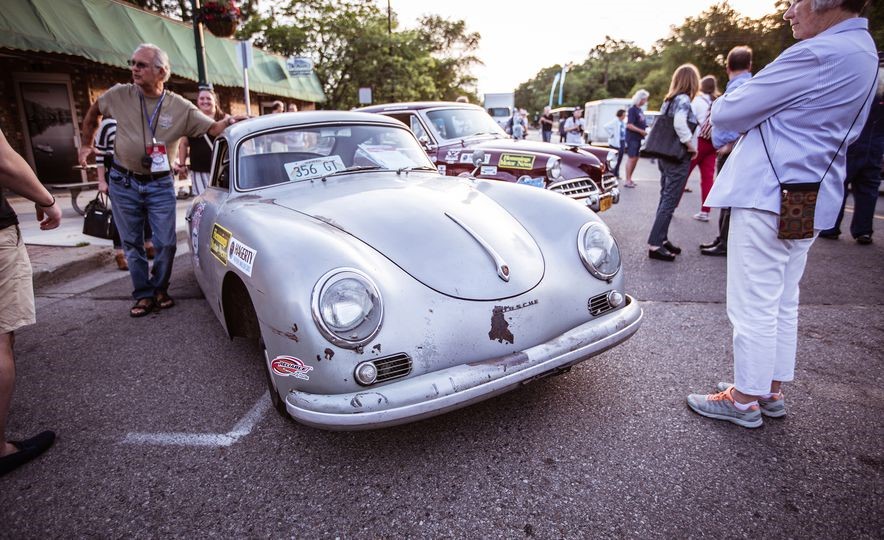 Daniel Ribner thought he heard a rod knock in his 1958 Carrera GT Coupe, so he put it in his garage. The year was 1969. In 2017 his son Alan decided to take it out of the garage. The weather in Brooklyn, New York was kind to the car and there was only some surface rust from debris and moisture on the front of the car. My good friend Nick Clemence from European Collectibles was able to purchase the car from Alan and I was the lucky guy who ended up with it.

I decided to drive it in this year’s The Great Race and we prepped the car as best we could. We rebuilt the tranny, cleaned the 80 liter fuel tank, installed new brakes and tires. We made sure all the systems were functioning - or so we thought. I had never run a timed rally before, but there was a set of Heuer rally clocks set into the glove box door from back in the day. This was a good sign as far as I was concerned.

I put in a call to my best high school friend and surfing buddy Loyal Wise in San Diego who is a retired accountant and asked him to be my navigator. We met up in Jacksonville, Florida on June 21. The first scheduled practice run was on the 23rd and we drove out to the starting point and turned off the car.

Two minutes before our starting time I cranked the engine but it wouldn’t start. We determined there was no power to the coil so I ran a hot wire from the regulator and headed up the road to a repair shop.

We had to run a wire from the ignition switch out the door and along the rain gutter into the engine compartment to the coil. We were good to go.

The Truth About Rallying

Following the rally instructions on where to turn and what speed to go takes intense concentration, to say the least. My rally speedometer was mounted right above my steering column and I guessed that I had to look at it every two to three seconds for 8 to 9 hours a day to make sure my speed was correct. Getting the speedometer calibrated correctly is a whole other story as you must maintain exactly 50 miles an hour for anywhere from 30 to 60 minutes which is a real challenge. We were totally exhausted at the end of every day.

I made an agreement with Loyal that when we made mistakes we would laugh, as it would be a learning experience with no blame or shame. The first day we did well with most of the times for different legs varying from one second to one minute. I thought we were doing great. Every lunch and dinner time we would pull into a different town where each car would be announced. We would then line up on the streets for about an hour and have lunch or dinner. Hundreds or thousands of people would be on the streets pouring over the cars and talking story with the owners, which was very fun.

The Great Race route went from Florida to sponsor Hagerty’s hometown of Traverse City, Michigan over nine days. There were roads of all kinds and small towns for lunch and dinner stops. In Sault Ste. Marie, Michigan the Soo Theater marquee looks as original as the Carrera.

As the days progressed we would make lots of errors and sometimes they would stack up and we would get overwhelmed. When that happened one of us would start laughing and then the other would start going off. We suffered from cramped abdominals, streams of tears and splitting headaches. The only way I could really stop myself was to take my feet off the pedals and start stomping on the floorboards. It got to the point where we were totally out of control and hysterical and a couple of times, and I was ready to pull over and call 911. This went on every day until the race was over.

The roads we traveled over were all rural and in great condition with beautiful scenery. Sometimes when we missed a turn and had to make up time we would be flying through the cornfields at about 65 miles an hour. Making so many mistakes enabled us to have so much fun it was incredible. The only other breakdown we had was in Auburn, Indiana where a leaky rear axle seal was fixed in the RM garage which was open to us that evening for any repairs (good karma). AutoZone had the seal for $22.

On the last day of the race I decided to just drive by the seat of my pants and not pay too much attention to the Speedometer. When we got our times at the end of the course we had scored an Ace on one of the legs - which meant we had a perfect time down to the second, we both started screaming in disbelief. We finally arrived at the end of the race in Traverse City and Wayne Carini put the gold medal around my neck. It seemed like I was in a parallel universe. I had to ask myself where we were and what had we just done, as if I had just woken up from a dream.

As far as I’m concerned, trying to follow the rally instructions is boring and tiresome. I think it takes a certain type of personality to really enjoy the exacting demands of a timed road rally, and that is not me. However, we had an absolute blast and it was totally worth driving 2400 miles in nine days. I had never driven that far so fast in my life. The Great Race was an incredible experience that I will always remember with a big smile on my face. The people we met and the variety of 110 cars driving through rural America was a real treat.

The cops were all over the race. In fact, they were in the race, like this ‘64 Ford cruiser in hot pursuit of the next checkpoint. Another black and white unit was on a mission from God. The 110 entries were an eclectic mix ranging from ancient to just classic. The crowds loved it. 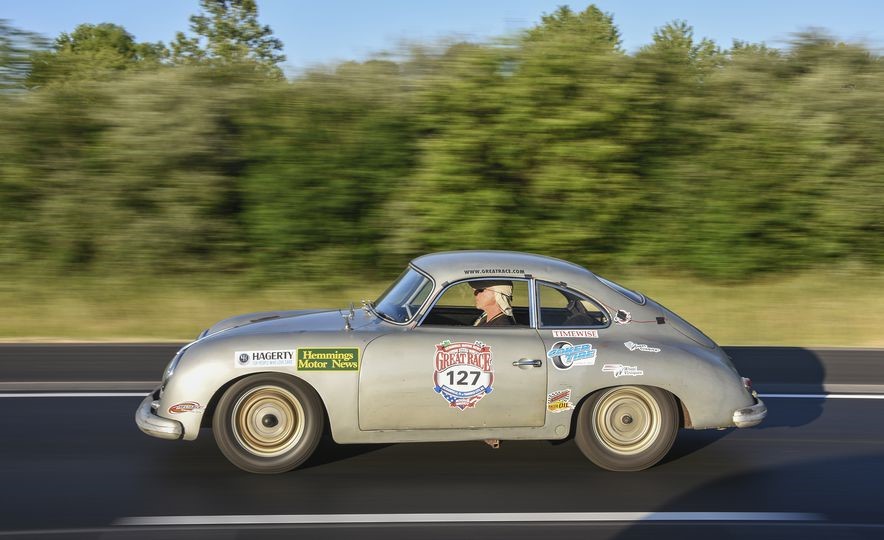